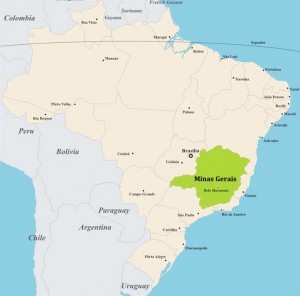 The Taiwanese company Foxconn (Hon Hai Precision Industry Co., Ltd) has appeared often in the global news in recent months, owing largely the labor practices of its Chinese plants that make iPhones and other popular electronic devices. According to the Wikipedia, Foxconn factories “assemble around 40 percent of consumer electronics products in the world.” The company is the largest private employer in China.

Foxconn’s production facilities have recently been spreading across much of the world. The company runs factories in India, Malaysia, Mexico, and several parts of Europe. It is currently the Czech Republic’s second largest exporter. The firm has recently turned its attention to booming Brazil. In February 2011, Foxconn announced that it would begin making touch-sensitive screens in the Brazilian state of Minas Gerais, planning a US $2.5 billion investment. Overall, Foxconn investments totaling US $12.5 billion are scheduled for Brazil.

Foxconn is not the only multinational corporation to announce major investments in Minas Gerais. On March 5, “CNH signed a Memorandum of Understanding with the state of Minas Gerais (Brazil) to lay the groundwork for a R$600 million investment in a new construction equipment plant …” CNH Global N.V, a subsidiary of Fiat Industrial, is an Illinois-based company with 28,800 employees, best know for its New Holland and Case construction-equipment brands. Rapid Brazilian economic growth has created a hot market for construction equipment.

Minas Gerais is little known outside of Brazil, yet it is an extremely important place. With roughly twenty million people, it is Brazil’s second most populous state, and it ranks third in terms of economic output. The state capital, Belo Horizonte, is Brazil’s third largest urban zone, with 2.5 million inhabitants in the city proper, 5.5 million in the official metropolitan area, and 9.0 million in the expanded metro area.