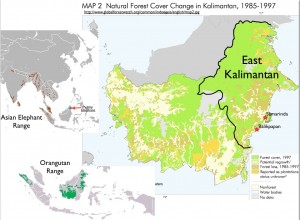 Indonesia’s province of East Kalimantan, located on the massive island of Borneo, is by far the most economically productive part of the country. Its Gross Regional Product is almost five times the national average, exceeding even than of Jakarta, the national capital, by a substantial margin. The province’s wealth is based heavily on the exploitation of natural resources, especially oil, natural gas, and coal. Logging has also been a major source of income, although most of the central portion of the province has been thoroughly deforested. Agriculture, much of it focused on oil palms, has been expanding rapidly in this area. Not surprisingly, East Kalimantan’s population has been booming, jumping from 2,800,000 in 2005 to 3,550,000 in 2010. Immigration from elsewhere in Indonesia has resulted in a highly mixed population, as well as ethnic tensions. Javanese people now form the largest group in the province (30 percent), followed by Buginese from southern Sulawesi.

Rapid population growth and economic development have generated headaches for economic planners. Indonesian authorities have hoped to turn the core area of the province around Samarinda into a major food production zone, but according to a recent article in the Jakarta Post, overlapping land claims and mining disputes are “threatening to scuttle” the entire project. Coal mining has been held back by a legal dispute pitting London’s Churchill Mining Plc against Indonesian’s Nusantara Group over what is reported to be the “world’s seventh-largest undeveloped coal asset.” Churchill recently announced that it would seek international arbitration against Indonesia, claiming that “it has been subjected to a sustained campaign to expropriate its rights as a legitimate foreign investor…”

Environmental issues also loom large in East Kalimantan. Although most of the province is devoted to commercial logging and agriculture, sizable areas have been set aside for natural preservation, including the 2,000 square kilometer Kutai National Park, noted for its orangutan population. A recent report, however, claims that “Orangutans in Kutai National Park in East Kalimantan face a bleak future unless urgent measures are taken to stop wildlife poaching and illegal logging in the ostensibly protected area.” Local elephant populations are also in trouble. In late February, the Jakarta Globe reported that a herd of starving elephants was “ransacking villages for food in the Tulin Onsoi subdistrict of Nunukan, East Kalimantan, destroying farms and angering residents who are threatening to kill the protected animals.”  According to local residents, “the forest where elephants used to live had been razed by palm oil plantations and mining companies.” The Borneo elephant, also known as the pygmy elephant, is a severely endangered animal. Scientists are unsure whether it forms a separate subspecies of the Asian elephant.