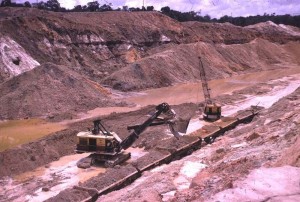 Stabroek News recently reported that Russia would write-off $50 million in debt to the government of Guyana. Debt write-offs for the impoverished South American country are nothing new.  In 1999 alone, Guyana successfully negotiated $256 million in debt forgiveness. Almost all of the money owed by the country to the U.S. has been forgiven. Yet repayment burdens remain high. As the Wikipedia reports, “Guyana’s extremely high debt burden to foreign creditors has meant limited availability of foreign exchange and reduced capacity to import necessary raw materials, spare parts, and equipment, thereby further reducing production.”

Although ostensibly aimed at countering the narcotics trade, Russia’s recent debt write-off may be related to its investment activities in the Guyanese bauxite (aluminum ore) industry.  The Russian company UC Rusal, the world’s largest aluminum producer, recently announced plans for a $21 million expansion of its main facility in Guyana. UC Rusal is a highly global firm, operating in nineteen countries. Although based in Moscow, UC Rusal is incorporated on the island of Jersey, where it also maintains its main financial center. A British Crown Dependency, Jersey maintains its own financial laws, which are very favorable for international business operations.

Russian investments in Guyana have often been controversial. In 2011, opposition politicians in the country threatened to expel both Russian and Chinese firms from the bauxite industry due to labor-law violations. As reported by TerraDaily, “Russian aluminium giant UC Rusal has been at loggerheads with the Guyana Bauxite and General Workers Union for more than two years over the controversial layoff of 120 workers who had demanded better pay.”

(Photograph from Guyana Then and Now.)