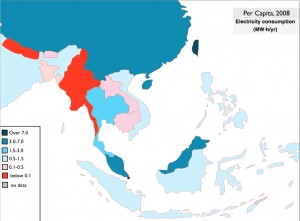 In late 2011, Burma surprised the world by cancelling the massive, Chinese-financed Myitsone dam in Kachin state. In early 2012, the Burmese government again astounded many by suspending an $8 billion, 4,000-megawatt, coal-fired power plant at Dawei in the southern part of the country, due mainly to environmental concerns. As reported by Bloomburg, “the Dawei project, undertaken by Thailand’s Italian-Thai Development construction company, is to be a massive heavy industry zone with a total investment of more than $50 billion, and the cancellation of the power plant may hinder its development.” Reuters has also cast doubt on the Dawei project, which Burmese officials had hoped would become the “new global gateway of Indo-China.”

Although environmentalists were delighted by the cancellation of the dam and power plant projects, many Burmese are concerned about the country’s chronic shortage of electricity. Admittedly, the Dawei project would have been of little help on this score, as most of the power generated would have been exported to Thailand, just as most of the electricity from the Myitsone dam project would have gone to China. But the question remains open as to how Burma can supply itself with adequate electricity. Although the country has large supplies of natural gas, most production is locked into long-term export contracts with China and Thailand.

As The Irrawaddy summarizes the situation: “Amid all the expansive talk of Burma being on the cusp of an economic boom, with special business zones, ports, railways, factories and half a million tourists queuing at the door, there’s one very vital ingredient missing—electricity.” Or perhaps more than one; the same article concludes with a quotation noting that, “Corruption, a weak legal system and judiciary, continuing human rights abuses and a lack of protection for investors are significant risks that may take some time for Myanmar [Burma] to fully address.”