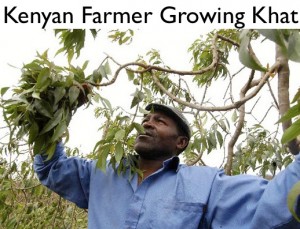 According to a report yesterday in Shabelle News, the radical Somali Islamist group Al Shabab has banned khat (qat) chewing and trading in the part of the country that it controls. Vehicles equipped with loudspeakers reportedly drove through the streets of towns under Al Shabab authority, informing residents that the mildly euphoric drug would no longer be tolerated. Khat consumption is widely viewed as a “grey area” under Islamic law; most Muslims in the region have no objection, but some considered it to be a form of intoxication, and hence want it outlawed.

Banning khat could generate increased opposition to Al Shabab’s brutal rule. According to some sources, some three-quarters of Somali men chew khat daily, a figure rivaling that of Yemen, normally regarded as the center of khat culture. Not long ago, Al-Shabab itself was rumored to make much of its money by importing the drug from Kenya. Khat is a big business in Somalia, worth an estimated one million dollars a day in 2010. It is also a water-demanding crop, and hence is not cultivated extensively in arid Somalia. In recent years, khat-growing has been expanding rapidly in Kenya, mostly for the export market. In several areas, Kenyan farmers have been ripping out coffee plantations and replacing them with more profitable khat trees.

Medical authorities disagree about the potential dangers of khat use. An article from The Lancet, discussed in the Wikipedia article on the substance, claims that khat has a low addiction potential and does little physical harm. Many experts, however, think that it responsible for many of the social and economic problems of Yemen and Somalia. According to a 2006 Washington Post article:

In 1980, the World Health Organization declared khat a highly addictive drug, and East African leaders have campaigned against it, saying chronic use leads to high divorce rates, wife beatings and job loss. In Somalia, opponents call the habit a national epidemic and say men who use the drug neglect their families by spending huge amounts of cash and time on it.