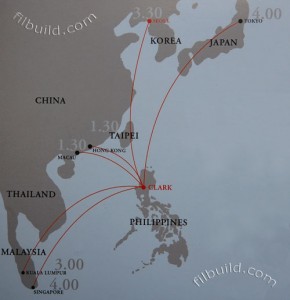 A prominent Filipino politician is seeking support from the country’s Department of Tourism for his lobbying effort to establish a Disneyland theme park in the Clark Freeport Zone, a massive (4,400-hectare) trade-oriented redevelopment area that occupies the former U.S.-run Clark Airbase in central Luzon. According to Representative Carmelo “Tarzan” Lazati, “This endeavor, if successful, would bring in more visitors to the country and make the Philippines as one of the best, if not the best, tourist destinations in the world.” Although the Clark Freeport Zone does boast advanced infrastructure and a superb airport, the establishment of new “Disneyland” in the region seems unlikely. Tourism in the Clark area is currently focused on commercial sex in nearby Angeles City, as the brothels that once catered to American servicemen now attract an international clientele. Such a business hardly seems in keeping with the wholesome Disney image.

The local sex industry recently made headlines in the British publication Mail Online. One of its recent headlines screamed, “Not again! ANOTHER Wiener (and politician) faces calls to resign after ‘posing with prostitutes’ in Philippines.” As the article outlines, New Mexico county commissioner Michael Wiener was recently photographed with four “bar-girls” in his arms by Seattle-based photographer John Keatley, who was in Angels City to “document the thriving sex tourism industry there.”  Weiner denied any wrong-doing, stating that he “’just wanted to take a quick tour,’ comparing it to people wanting to see the casinos at Las Vegas, even if they didn’t gamble.”

Real estate seems to be a thriving business in Angel City, as the area seeks to attract retired men from the wealthier parts of the world. As a result, city officials consistently stress the friendliness of the local inhabitants. A recent news article on an Angeles City-based tourism site, for example, trumpets the fact that the “The Philippines ranked 8th in the list of the ‘World’s Friendliest Countries’ in the ‘Expat Explorer Survey 2011’ conducted by banking giant HSBC.” As we shall see in a forthcoming GeoNote, such a ranking is little cause for celebration, as the “Expat Explorer Survey” is deeply problematic index.