New construction projects in urban areas nearly always require the destruction of whatever buildings stood on the land previously. Although efforts to preserve historic buildings in the U.S. have generated cynicism and at times seem absurd, the same cannot be said of Beirut, Lebanon. Beirut is one of the oldest cities in the world, with a history stretching back some 5,000 years. In early 2011, construction workers in Beirut’s Mina al-Hosn district unearthed what archaeologists suggested was a port used by the city’s Phoenician inhabitants in the 5th Century B.C. The discovery prompted Lebanon’s former Minister of Culture, Salim Wardeh, to designate the area as an archaeological site in order to protect it from development. Although archaeologists now dispute whether the ruins were in fact a port, and whether the site was actually built in the 5th Century B.C., they continue to agree on its importance and antiquity. 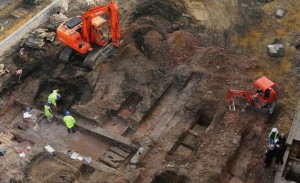 Nevertheless, Lebanon’s current Minister of Culture, Gaby Layoun, decided to revoke former minister Wardeh’s decree on June 26 of this year on the grounds that the site “does not involve any trace of Phoenician or Roman port infrastructure”. The decision opened the way for construction, and bulldozers moved in almost immediately to remove the archaeological debris. These events prompted a quick riposte from Wardeh and two other former Ministers of Culture who deplored “the destruction of heritage and the violation of Lebanon’s history by one who is responsible for preserving them”. The overseer of archaeological excavation at the site, Hisham Sayegh, resigned from the Ministry of Culture on June 27 during a protest calling for Layoun to step down. Addressing Layoun directly, Sayegh claims: “Never has archaeology in Lebanon since the last centuries and during wars of ancient times, or during the Israeli invasion and bombardment of Beirut, experienced such destruction as it has witnessed since you took office at the Ministry of Culture.” Layoun has responded to his critics vigorously, promising to press charges against those leveling insults in the future. 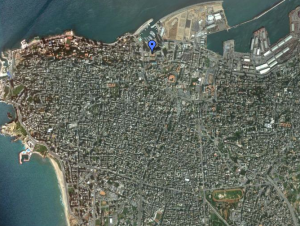 Location of the site within Beirut

Historical heritage can be a fraught issue in Lebanon, a land where Christians and Muslims of various sects coexist in an uneasy balance. Lebanon’s Phoenician past has the potential to serve as a unifying force, since it is a legacy that neither religious group can theoretically monopolize. Though generalizations should be taken with a grain of salt, Lebanese Christians have in the past used Phoenician identity as a moral weapon. By identifying themselves closely with Phoenicia, some Maronite Christians assert their claims on Lebanon’s past to be more authentic than those of their Muslim neighbors, who usually look more to the Arab and Ottoman heritage. Despite recent genetic tests indicating that both Christian and Muslim Lebanese share equal amounts of “Phoenician blood,” the association of Phoenicia with Christian activism in Lebanon has been slow to fade.

The disputed construction site and former archaeological dig in Beirut may or may not be Phoenician, but the backlash against its destruction shows that Lebanon’s ancient past is a highly valued resource among Lebanese of all faiths. One can only hope that remaining ancient sites in the area can help foster an atmosphere of respect that will allow Beirut to thrive for another 5,000 years.