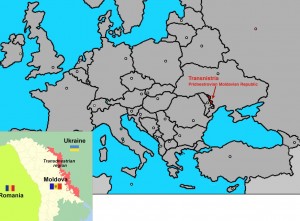 In early May, the European Union welcomed the resumption of railroad freight traffic through the break-away state of Transnistria*, sandwiched between Ukraine and Moldova. Catherine Ashton, EU High Representative for Foreign Affairs and Security Policy, described the event as “a crucial step forward for restoring confidence between the sides to the Transnistrian issue.” Freight traffic across the region had been suspended for the past six years, owing largely to the unsettled dispute between Transnistria and Moldova; Moldova claims the entire territory of the unrecognized state, and most of the international community backs the Moldovan position. Seemingly endless negotiations, however, have finally brought some progress. Recently, the two sides:

[A]nnounced they had reached common ground on other issues that will be soon translated into life, such as building cooperation on healthcare between the two banks of Nistru River in order to deliver quality health services, resumption of the phone connection between the two banks of the river, suspended a couple of years ago, resumption of road traffic on the bridge in Gura Bicului; simplification of transit of Transnistria in summer ; arrangements for 100 children on the right bank of the Nistru River to spend the summer holidays in camps. The experts named in charge of these areas are expected to identify real solutions in the near future.

Transnistria is widely regarded as a Russian client state that is a center of human trafficking, the arms trade, and drug transshipments. Its international diplomatic standing is highly limited. As the Wikipedia article on the “Foreign relations of Transnistria” reads in its entirely:

The Transnistrian republic is currently recognized by three states with limited recognition [South Ossetia, Abkhazia, and Nagorno-Karabakh], and is member of one international organization, the Community for Democracy and Human Rights, that was established by these four states. Russia maintains a consulate in Transnistria, but hasn’t recognized it as independent state. During a visit to Kiev, President Dmitri Medvedev said he supported “special status” for Transnistria and recognised the “important and stabilising” role of the Russian army.

On the cultural front, Armenia recently announced that it would “build a church in honor of great Armenian Enlightener Gregory Illuminator in Grigoriopol, Transnistria.” Armenians settled extensively in the Romanian-Moldovan-Transnistrian area in earlier centuries, and Grigoriopol was founded by Armenian immigrants in 1792. In recent years, the city has seen been the focus of Russian-Moldovan tensions. Although Transnistria as a whole has a clear Russian-Ukrainian majority, Moldovans constitute the largest community in Grigoriopol. As the Wikipedia article on the town explains:

[L]ocal Moldavian inhabitants [wanted] to use Romanian language and Latin script in the local Moldavian school, which is against the policy of the government of Transnistria. The Transnistrian press attacked the local authorities “that allowed the fifth column of Moldova in Transnistria to operate.