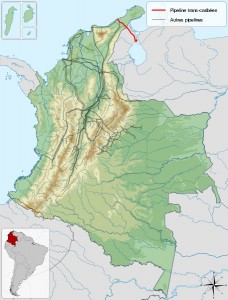 Relations between Colombia and Venezuela have been so tense over the past decade that it sometimes seemed that the two countries were at the verge of war. Such tensions, however, have recently diminished to the point where the neighboring states are now discussing building a pipeline to transport Venezuelan crude oil to Colombian ports, a project enthusiastically backed by China. Just this week, moreover, the Colombia company Ecopetrol, the country’s largest oil and natural gas firm, announced that it would soon be drilling for oil in Venezuelan territory.

The improvement in Colombian-Venezuelan relations is often linked to the election of Juan Manuel Santos to the presidency of Columbia in 2010, as he is considered to be more accommodating to Venezuelan interest than his predecessor, Álvaro Uribe. But it is also true that the fossil fuel industries of the two countries, as well as their economies more generally, can profit through increased cooperation. Colombia’s economy is currently booming, having grown by 5.9% in 2011, due in part to the expanding oil and natural gas sectors. But Colombia’s fossil fuel deposits are limited, and Venezuela’s vast reserves beckon. Venezuela’s oil and gas economy, meanwhile, has been held back by the politicization of the industry, and investment by foreign firms is needed.

Other complementarities further link the energy sectors of the two countries. For example, the Trans-Caribbean gas pipeline, inaugurated in 2007, takes natural gas from Colombia’s Guajira Basin to Venezuela’s Maracaibo oilfields. Gas is then injected into the semi-depleted oil reservoirs in order to boost production. The Colombian oil and gas industry, moreover, has been held back by periodic attacks on pipelines by leftist rebels, who have allegedly received support from Venezuela in the past. Improved diplomatic relations between the two countries could also be helpful on this score.