Tensions between Spain and Argentina have recently mounted. Last fall, Spain began to complain that its fishing fleets operating around the Falkland/Malvinas islands were being harassed by the Argentine Navy, despite having licenses from the Falkland Islands government—a government that Argentina does not recognize. More recently, Argentina nationalized the oil company YPF, a subsidiary of the Spanish company Repsol, angering both Spanish investors and European Union officials, and provoking reprisals. Spanish fishing interests are now concerned about the fall-out from this most recent dispute. The EU has decided to cancel tariff preferences for Argentinean products in retaliation, but most of the fish exported from Argentina derive from joint Spanish-Argentine ventures. As noted in a recent FIS article:

Last year, Argentina sent fishery products for about EUR 1,500 million to the EU. Sixty per cent of that total — more than EUR 800 million — came from sales performed by Spanish groups operating in the South American country…. Currently, more than one hundred factory ships, owned by Spanish companies, operate in Patagonian ports. These firms employ about 250 Spanish people and a higher number of Argentinean crew members.

Fishing is a huge business, and major cultural concern, in Spain. In 2007, Spain was the world’s third largest fish importer, after Japan and the United States, and the seventh largest exporter. 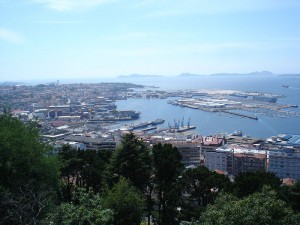 The Spanish fishing industry is centered in Galicia, in the northwestern corner of the Iberian Peninsula. Galicia’s Port of Vigo (shown in the photograph posted here) is not only the largest fishing center of Spain, but is the largest fishing port in the world. It is also home to the world’s biggest fishing company, Pescanova, with revenue of 1.5 billion Euros in 2009. Fleets from Vigo operate extensively in the coastal sections of Namibia, Mozambique, Chile, and Peru, in addition to those of Argentina.

Spain is currently an economically stressed country, and Galicia has long been one of its poorer regions. Vigo, however, unlike Galicia’s interior hinterlands, is still relatively prosperous. Any threats to its all-important fishing industry will be taken quite seriously.