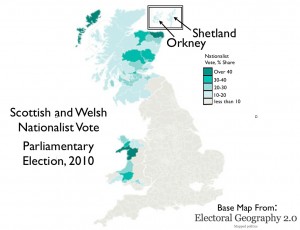 The Scottish National Party (SNP) has gained enough power to have arranged for a vote on Scottish independence in 2014. But although the party has made major gains in recent years in many parts of Scotland, it has done poorly in others. Voters in the northern islands have generally rejected the SNP. A local political leader, the Earl of Caithness, recently called for a “clause [to be] added to Westminster legislation to allow Shetland and Orkney to remain part of the UK if voters [there] reject Scottish independence in the 2014 referendum.”

As the electoral map posted here shows, support for the SNP is strong in the oil-rich northeast and in the Scottish-Gaelic-speaking Outer Hebrides in the northwest. Support reaches notably high level in and around the city of Fraserburgh in the northeast, Europe’s largest shellfish port.