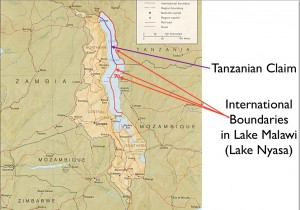 International boundaries in oceanic space are often complex and disputed, especially in areas that abound in hydrocarbons. Boundaries that extend across lakes are usually less contentious and convoluted, but that is not always the case. Consider, for example, Lake Malawi (also known as Lake Nyasa) in southern Africa, widely considered to be the world’s eighth largest lake. As can be seen on the map, the central portion of this lake is evenly divided between Malawi and Mozambique, yet Malawi controls two islands that are well within the territorial waters of its neighbor, Chizumulu and Likoma, which together constitute a Malawian exclave district, with a population of some 13,000. As the Wikipedia explains, this situation “came about because the islands were colonised by Anglican missionaries spreading east from Malawi, rather than by the Portuguese who colonised Mozambique.”

The boundaries extending across southern Lake Malawi not particularly contentious, but the same cannot be said for those in the north. As can again be seen on the map, the international community has in general accepted Malawi’s claim to the entire northern portion of the lake, right up to the Tanzanian shore. Tanzania, not surprisingly, objects, claiming that the border should run down the center of the lake, arguing that “most international law supports sharing common bodies of water by bordering nations.” Tanzania regards the Malawian claim as illegitimately rooted in the colonial dispensation.  As again explained by Wikipedia, “The foundations of this dispute were laid when the British colonial government, which had recently captured Tanganyika from Germany, placed all of the water under the jurisdiction of the territory of Nyasaland [which later became Malawi], without a separate administration for the Tanganyikan portion of the surface.”

This territorial dispute between the two countries has long simmered, but it has recently intensified due to the decision by the Malawian government to award an oil- and gas-exploration contract in the lake to the British company Surestream Petroleum. Then company is currently undertaking environmental impact assessments. The Tanzanian government has demanded a halt to all activities until the dispute is settled. Talks are currently underway, but tensions remain high.  Earlier today, according to the Nyasa Times, Malawian police “arrested two freelance journalists who went to cover the ongoing diplomatic border talks between Malawi and Tanzania at the Mzuzu Hotel accusing them of publishing false news.”