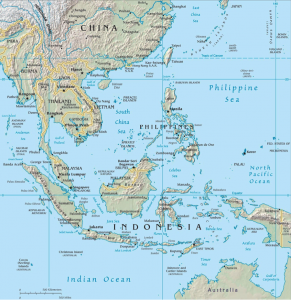 Indonesia, a relatively poor, highly populated country that is diplomatically independent and active, has recently agreed to several new joint military efforts with the United States, Australia, and China. On a visit to Darwin, Australia, the Indonesian president Susilo Bambang Yudhoyono concluded a defense agreement with Australia and stated his desire for military cooperation between his country and the United States, among other powers.Not long before that conference, Indonesia had performed joint anti-terror military exercises with China, whose greatly expanding armed forces and growing international clout have caused tensions with the United States.

While Indonesia has historically been wary of foreign powers, it has also had difficulty coping alone with natural disasters and ethnic and religious insurgencies. At the same time, securing the favor and strategic cooperation of Southeast Asian countries has become an important American foreign policy goal in the increasingly influential Asia-Pacific region. Indonesia criticized the creation of new American military bases in Darwin as risking greater tension between the United States and China. However, the country also participated in the Rim of the Pacific (RIMPAC) joint military exercises this summer, as it has in previous years, and is proposing to cooperate with America and other countries to carry out disaster relief military exercises.

Indonesia will also soon conclude new defense agreements with Australia, including the heavily subsidized sale of several military planes and a commitment to cooperate on disaster relief and other peacetime military endeavors. Australia regards stable relations with Indonesia as a chief security priority but has had difficulty obtaining them. Over the past several decades, Australian militaryrelations forces have intervened in nearby countries, including in East Timor, where they fought against pro-Indonesian militias. In recent years, Australia has sought better relations, increasing aid to its Southeast Asian neighbor and creating new student exchange programs. According to the Australian government, “The relationship between Australia and Indonesia has never been stronger.”

Although Indonesia has cooperated with the United States and Australia, it has also recently performed military exercises with China, which has chafed at America’s new strategic interests in East and Southeast Asia. China has both criticized American-led multilateral war game events such as RIMPAC and accused the United States of attempting to prevent its rise. However, China has engaged in similar joint military activities. Special Forces of China’s People’s Liberation Army, for example, recently undertook anti-terror exercises with their counterparts from the Indonesian National Armed Forces.