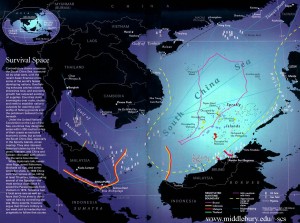 Mounting tension in the South China Sea has been amply documented in the mainstream media. However, reporting often does not adequately cover the situation’s geographical complexity, as the geopolitical tussles work out differently for the Sea’s various archipelagos, isolated islands, and reefs. Whereas all or parts of the Spratly Island are claimed by seven different countries, the Paracels are claimed by only China, Taiwan, and Vietnam.

The Paracel dispute, like those elsewhere in the South China Sea, has recently intensified. In late June, Vietnam restated its claim to sovereignty over the islands. China soon responded with the establishment of a prefectural level city that is meant to govern the Paracels along with the Spratlys and Macclesfield Bank.

The Paracel Islands have few natural resources, but sovereignty brings a large Exclusive Economic Zone with fisheries and potential oil and natural gas reserves. Vietnam and China both stake their claims on historical grounds. But as the archipelago has always had few or no inhabitants, determining past control is difficult. French Indochina took possession of the islands in 1932, and ownership passed onto South Vietnam after decolonization. As the Saigon regime approached collapse in 1974, China seized the islands, ousting Vietnam’s military garrison and establishing its own.

Competition over potential hydrocarbon deposits heightens diplomatic tensions. The state-owned China National Offshore Oil Corporation recently announced that it would take bids to explore contested waters near Vietnam. In turn, Vietnam soon extended contracts to India to look for submarine gas in areas claimed by China. Though Indian efforts so far have been unsuccessful, Vietnam probably sees a lengthened contract as a diplomatic tool against China.

The two country’s recent actions in the South China Sea are most likely aimed at gaining domestic support for their respective governments. Beijing seeks to enhance government popularity during the transition process between President Hu Jintao and his successor. The growing ruckus over the Paracel Islands also reflects recent trends in the South China Sea as a whole. Since April, China and the Philippines have wrangled over Scarborough Shoal, without any sign of resolution.

Disputes over the islands of the South China Sea have historically fluctuated between violent confrontation, as seen in China’s seizure of the Paracel Islands, and glimmers of reconciliation, as seen in the Bali East Asia Summit last year. As suggested by one recent report, such fluctuations owe in part to China’s lack of a regular policy toward the South China Sea across all levels of government. Though China’s civilian authorities are sometimes conciliatory, its military leaders are often more bellicose. The growing presence of U.S. forces in the Asia-Pacific region may help prevent China from militarily asserting its South China Sea claims, but tensions between China, Vietnam, and the other disputing countries may increase in the short term.