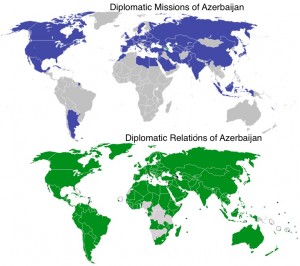 Tensions between Azerbaijan and Iran have been intensifying in recent days. On February 23, hackers from groups called “Iranian Cyber Army” and “Cocaine Warriors from Persia” attacked several Azerbaijani website, including that of the national airline, AZAL. Two days previously, Azerbaijani security forces reported the arrest of an armed gang with ties to the Iranian Revolutionary Guards and Lebanon’s Hezbollah, which was supposedly stockpiling weapons in preparation for an attack on foreigners in Baku. Azerbaijan has also claimed that Iranian military helicopters have violated its airspace. Iran, for its part, has accused Azerbaijan of sheltering Israeli Mossad agents seeking to assassinate Iranian nuclear scientists. Both sides have accused the other of funneling narcotics into their national territories. Azerbaijan recently arrested an Iranian journalist on drug charges, which Iran claims were fabricated. Iranian sources, meanwhile, claim that Azerbaijan has sent troops to Afghanistan for the express purpose of protecting the country’s opium crop, which it claims is a major “source of income for the occupiers.”

The tension between the two countries is linked to Azerbaijan’s relatively close and reportedly tightening relations with Israel, as well as to the fact that up to 20 millions Iranians are ethnic Azeris, some of whom have divided loyalties.  According to report by NPR, Azerbaijani partisans in the Iranian city of Tabriz recently disrupted a soccer game by unfurling flags of Azerbaijan; the video of the incident was evidently “a big hit in Baku.” The same article notes that, “Israel buys 30 percent of its oil from Azerbaijan, and recently awarded a lucrative gas-drilling contract off its Mediterranean coast to an Azerbaijani firm.”

While Azerbaijan’s relations with Iran have deteriorated, its government has been trying to shore up connections with other states. Last week, officials from Azerbaijan met with Austrian officials to discuss “bilateral trade and economic relations and the Azerbaijani entry into the World Trade Organization.” After similar meetings with Belarus, the two countries pledged to support “the expansion of economic cooperation, the development of bilateral relations, the support for economic relations between the countries” and much more. An Azerbaijani delegation even visited the U.S. state of Mississippi in order to enhance trade ties and further develop bilateral relations. Azerbaijani officials are less favorably disposed to California at the moment, due to a pending Californian assembly bill that would recognize, “the deportation of more than 350,000 Armenians from Azerbaijan” in 1988. Azerbaijan claims that this legislative maneuver is “ignorant and irresponsible,” since outrages were committed by both Azerbaijan and Armenia during this period.