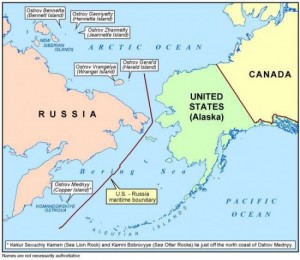 Sovereignty issues have recently been appearing in Alaskan newspapers. On February 22, the Alaska Dispatch noted that former U.S. senate candidate Joe Miller was lambasting Barak Obama for relinquishing control of several sizable “oil-rich” Alaskan islands, ostensibly because of the Obama administration’s hostility to the petroleum industry. The accusation immediately began to ricochet around the right-wing blogosphere. Gateway Pundit’s headline ran, “Report: Obama Administration Is Giving Away 7 Strategic Islands to Russia.” On many blogs, hyperbole ran wild. One claimed that “the presidents and our elite have given away part of the US,” which it adduced as proof that the United States is “now a dictatorship”; another argued that this maneuver represented nothing less than “the destruction of a nation.”

On some of the larger conservative sites, however, cooler heads urged caution.  Although the comments on Free Republic included such opinion as “TREASON,” and “Is it to appease the Russians or to spite Sarah Palin?,” commentator JSDude 1 provided much needed context, informing readers that the islands in question have never been claimed by the United States and in fact have long been occupied by Russia. Another voice of moderation weighed in with the observation that the islands “don’t exactly look strategic to me unless strategic means cold.”

The lands in question are Wrangel Islands and parts of the DeLong Archipelago, located to the north of Siberia. Every few years someone proclaims that these islands rightfully belong to the United States, but such claims rest on a thin foundation, to say the least. Admittedly, in 1881 an American naval commander planted a U.S. flag, but that is about it. The Russian government officially extended sovereignty over the island in 1911, although it was challenged by a Canadian expedition in 1921. Since 1926, however, Wrangel has been under Soviet and then Russian rule. The United States recognizes Russian control, although a formal treaty specifying as much has never been ratified.  The extreme nationalist group State Department Watch thus claims that the US has a legitimate claim to Wrangel and their other islands, and should thus challenge Russian sovereignty.

Wrangel Island is well known in paleontological circles as the last redoubt of the wooly mammoth. Whereas mammoths went extinct elsewhere at the end of the Pleistocene roughly 10,000 years ago, they survived on Wrangel until about 1,700 BCE. The fact that wooly mammoths held out until the bleak island was first reached by humans is considered by some to be prime evidence that Pleistocene megafauna died out because of human hunting rather than climatic change (more on this when GeoCurrents turns to Siberia next month).

Alaska’s other recent sovereignty issue is domestic, pitting the state against the federal government over the jurisdiction of waterways in Yukon-Charlie National Preserve (a national preserve is administered by the National Park Service, but has a lesser degree protection than an actual national park). The dispute was brought to a head when federal authorities ordered a man to quit hunting moose in the park from the seat of his hovercraft. Although hunting is allowed in the preserve, hovercrafts are not. Alaska has challenged the prohibition, and the case is now going to court.