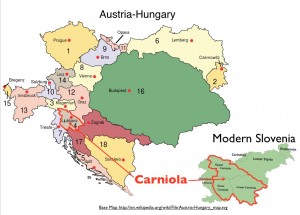 The row began last spring when Slovenia petitioned the European Union for official recognition of the “Krainer Wurst” (Kranjska klobasa in Slovenian) as a geographically specific product. Under the EU’s “protected geographical indication” (PGI) regime, foods and drinks so classified are regulated to ensure “that only products genuinely originating in that region are allowed to be identified as such in commerce.” (Existing examples, of which there are many, include Roquefort and Gorgonzola cheese as well as Champagne.) Austria quickly objected to the maneuver, fearing that it would be forced to rename its own “Krainer” sausage, the Kaesekrainer. Austrian officials further argued that their version of the sausage was distinct from that of Slovenia, owing to its cheese filling. The loss of the Kaesekrainer name, they contend, “would be an economic blow to sausage producers and to Austria’s cultural heritage.”

While the dispute is being considered by EU officials and as possible compromises are being discussed, Croatia voiced its own objections. Although Croatia is not an EU member, it is slated to join the union in 2013. Croatia produces its own “Kranjska sausage,” which that generates some $13 million annually. Like Austria, it does not want to be forced to rename the product.

As reported by the BBC, The European Commission describes Kranjska klobasa as a “pasteurised sausage made from coarsely minced pork and pork fat, with added salt, garlic and pepper. The sausage undergoes hot smoking and is eaten warm after brief warming in hot water. It has a distinctive “mildly smoky smell.” The Wikipedia article on the sausage contends that it is similar to Polish kielbasa, and further notes that it has become very popular in Australia:

Kranjska klobasa is known as Kransky in Australia, to where it was introduced by post-war immigrants from Slovenia in the late 1940s and 1950s. The Kransky is very popular in Australia and New Zealand. The Waiters Club in Melbourne, Australia, is renowned worldwide for its wide range of Kransky dishes.

The geographical designation Krain (German) or Kranjska (Slovene) is rendered in English as “Carniola.” Carniola was a historical duchy, under the control of the Hapsburg dynasty, the territory of which forms the core of modern Slovenia. Its territory did not extend to any appreciable extent into the areas that now constitute Austria or Croatia. On that basis, Slovenia does have a certain claim. But to restrict the name of a widespread, well-established product to a particular region of origin strikes many as an extreme move, much like limiting “wieners” to sausages produced in Vienna or “frankfurters” to those made in Frankfurt.

In the United States, the move to restrict “champagne” to sparkling wine made in Champagne has made some headway, but many Americans steadfastly resist the trend. As explained by Mental Floss:

The French are really, really prickly about misuse of the word champagne. Only sparkling white wine that comes from the Champagne region of France, in the northeastern part of the country, can be called champagne. And that’s not a suggestion; in Europe, it’s the law. It has been illegal for non-Champaignois vineyards to call their booze champagne since 1891. In fact, so important is French ownership of the word champagne that it was reaffirmed in no less important a document than 1919’s Treaty of Versailles—the one that ended World War I.

But here’s the loophole: The United States never ratified the Treaty of Versailles—not because of the champagne clause, but because the Republican-controlled Congress didn’t want to see the formation of a League of Nations. And so, in America, it is perfectly legal to call your sparkling wine “champagne.” In fact, you can call your gym shoes champagne, if you’d like.