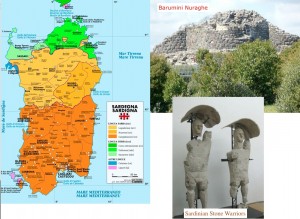 Archeologists on the Italian island of Sardinia have completed the painstaking reconstruction of “small yet unique army of life-size stone warriors which were originally destroyed by enemy action in the middle of the first millennium BC.” The statues originally stood guard over the graves of elite warriors, buried in the eighth century BCE. They were produced by members of the indigenous Nuragic culture, a little-known but impressive civilization that dominated Sardinia from the 18th century BCE to the 2nd century CE. The Nuragic culture is best known for its stone tower-fortresses, the nuraghe, sometimes considered Europe’s first castles. The remains of some 7,000 of these structures are still found on the island.

Although Sardinia is the second largest island in the Mediterranean, with a long, distinctive, and interesting history, it has often been ignored by outsiders. Few realize that the Sardinian language is not a dialect of Italian, but rather forms its own branch of the Romance linguistic family. The Sardinian language includes a number of ancient, pre-Indo-European features, which may have been derived from the language of the Nuragic civilization.

As the modern language map shows, not all parts of the island are Sardinian-speaking today. Most people in northern Sardinian speak Corsican, an Italian dialect, and a significant area in the northwest is Catalan-speaking. Standard Italian, of course, is spoken everywhere, and may be gradually replacing the other languages and dialects of the island.

Like Sicily and several regions of northern Italy, Sardinia is constitutionally defined as an “autonomous region with special statute,” allowing it to retain more of its tax receipts and run more of own governmental functions than other parts of Italy. Sardinia does, however, have an active movement pushing for full sovereignty. Its main political party, Independence Republic of Sardinia, is non-violent and social-democratic. It has undergone splits over the past few years, and has not done well in recent elections.