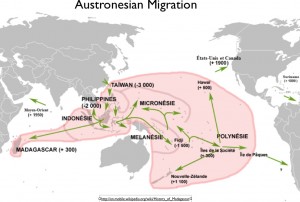 A new study of the genetic background of the people of Madagascar sheds light on the settlement of the island. It has long been known that the initial movement of people to Madagascar was relatively recent (1,000 to 1,500 years ago), and that it originated not from the African mainland but rather from the islands of what is now Indonesia. The new study, carried out by a team led by Murray Cox of New Zealand’s Massey University, examined mitrochondrial DNA, providing firm data on maternal lineages. The findings suggest that the first settlement of the island occurred around 830 CE, and involved a small group of women, numbering around thirty individuals. The researchers found no indication of women continuing to move from Insular Southeast Asia to Madagascar after the initial settlement event. Subsequently, however, another migration stream brought women (and men) from Africa to the island.

Many mysteries still surround the peopling of Madagascar. Cox’s dating suggests that the initial settlement occurred during the heyday of the powerful Srivijaya Empire, which controlled the Strait of Malacca and maintained a powerful fleet. But cultural evidence of Srivijaya’s role in the settlement process is lacking. The Empire was Buddhist, with Hindu elements, but religious practices of Indian origin were not established on Madagascar. The indigenous Malagasy language of Madagascar, moreover, is most closely related to the Barito languages of Borneo, not the Malay language spoken in Srivijaya.

Some have suggested that the first settlers could have been members of a tribal population from Borneo sent by Srivijaya, or perhaps by a Malay mercantile network, to establish a local base for food production that could aid their trading activities in the area. Others think that the settlement could have been entirely accidently, resulting from a ship or small fleet blown off-course. It is unlikely that mercantile activities would have directly led to the settlement of the Madagascar. Certainly traders from what is now Indonesia were active at the time in the waters of the western Indian Ocean, but it is thought that few women were involved in the process.