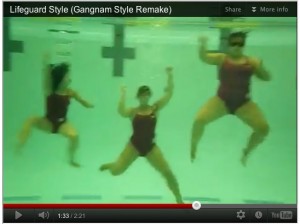 City slogans are almost always upbeat, but the positive messages that they are meant to convey are sometimes contradicted by the policies enacted by their own city governments. Such is the case in regard to the southern California town of El Monte (population 113,000), which advertises itself with the motto: “Welcome to Friendly El Monte.” Lately El Monte has been anything but friendly to its own employees. In a case that is getting international attention, the city fired 13 lifeguards and a swimming pool manager for making an innocent spoof video of the global YouTube sensation “Gangnam Style” in the municipal pool, despite the fact that they did so on their own time, using their own resources. Officials claim that their behavior “violated prohibitions on the use of city property and didn’t meet employee conduct standards.” An international petition campaign is now urging the city government to rethink its decision. The resulting publicity has certainly given attention to the spoof: “Lifeguard Style’ has been viewed more 1.5 million times on YouTube.

Gangnam Style, by South Korean hip-hop artist Psy (Park Jae-sang), mocks the social pretentiousness found in Seoul’s Gangnam District. Gangnam is not only the most exclusive neighborhood in South Korea, but perhaps in the entire world, noted for its conspicuous consumption. Psy’s satire, noted for a dance move that he himself describes as “cheesy,” has certainly hit a nerve, with more that 221 million hits on YouTube, and more than a million comments.