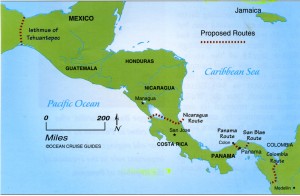 During 2010, some 299,803,162 tons of ships and cargo moved between the Atlantic and Pacific Oceans through the Panama Canal. This total would have no doubt astounded the canal’s builders, but to the Panama Canal Authority (ACP), which operates the canal today, it is a sign that canal’s current infrastructure is no longer adequate. Many ships are forced to wait up to ten days to cross the canal, costing shippers about $50,000 per day. Bidding wars often arise between ships, with some paying up to $200,000 to move ahead in line. To ensure that congestion in the canal does not drive away traffic, Panamanians in 2006 overwhelmingly passed a referendum proposed by former president Martín Torrijos authorizing a $5.25 billion expansion project. The project is generally considered a good investment by outside groups, and received A2 investment grade status from the credit rating agency Moody’s. It is expected to be complete around 2014.

Meanwhile, two of Panama’s neighbors—Nicaragua and Costa Rica—are themselves eyeing the inter-oceanic canal game after 98 years on the sidelines. On Monday, Nicaraguan President Daniel Ortega signed a bill passed by the National Assembly that set up a legal framework for construction of the Nicaragua Inter-oceanic Canal, with the explicit goal of competing for Panama Canal traffic. The proposed Nicaraguan canal would stretch some 200 kilometers and could cost upwards of $30 billion, the equivalent of nearly four years worth of Nicaraguan GDP. So far support for the project among western governments and private industry is thin, but both Russia and the United Arab Emirates have expressed interested in financing the canal. 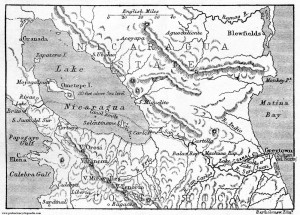 There are several potential routes for a Nicaraguan canal. The most cost-effective of these would run from the mouth of the San Juan River on the Caribbean coast upriver to Lake Nicaragua—the nineteenth largest lake in the world by area. A channel would then be dug across the isthmus of Rivas to allow ships to access the Pacific Ocean. This is not a new idea; in fact the basic outline of the route is over a hundred and fifty years old. During the California Gold Rush of the 1850s, the American shipping and railroad mogul Cornelius Vanderbilt operated a stagecoach line across the isthmus of Rivas, called the Accessory Transit Company, for gold-seekers traveling west. Vanderbilt was soon granted rights to build a canal to the Pacific, though his plans were never carried out. Nevertheless, the notion of a Nicaraguan canal remained potent, as shown in the 1906 map at left (source). A more humble (and realistic) version of the waterway proposed recently, known as the “Ecocanal”, would forgo the costly connection to the Pacific and instead focus on allowing shipping to access the various inland waterways of North America through Lake Nicaragua.

The San Juan River, the linchpin of any practical route to Lake Nicaragua, conveniently lies entirely in Nicaraguan territory, though it does directly border Costa Rica. Tensions along the border have been especially high since 2010, when Nicaragua’s dredging of the San Juan River damaged the environment of the Costa Rican parts of Isla Calero, which sits within the river. The resulting backlash helped to precipitate a small Nicaraguan invasion that became known as the Isla Calero dispute, infamous among Central Americans and geographers as the first armed incursion caused in part by a mistake in Google Maps favoring Nicaragua. Costa Rican President Laura Chinchilla responded by ordering the construction of a new road along the Costa Rica-Nicaragua border, known as the San Juan River border road project. Since the road was part of an emergency decree, it was able to bypass environmental review and avoid a great deal of scrutiny that is only now catching up with it.

Construction of the San Juan River border road project is now mired in scandal. Millions of dollars of construction contracts have been awarded to companies and individuals that possess no construction machinery or expertise. Allegedly, any National Roadway Council employees who spoke up about the corruption were fired. On top of these domestic indignities, Nicaraguans now argue that Costa Rica is building a “dry canal” that would allow high-speed movement of container traffic from one port to another. Dry Canals have in the past been proposed in both Colombia and Nicaragua. Though a Costa Rican conspiracy seems rather farfetched, a dry canal there might, if constructed, be a bargain compared to Nicaragua’s $30 billion vision.

One can easily lose track of the multiplicity of canals proposed in Central America over the years. Both Nicaragua’s Inter-oceanic Canal and Costa Rica’s San Juan River border road will likely join them as historical footnotes and topics of regional bickering while the Panama Canal continues to grease the wheels of the world economy. Then again, construction of the Panama Canal doubtless seemed similarly daunting when Ferdinand de Lesseps, the builder of the Suez Canal, left the region with nothing to show for his efforts but the bodies of 22,000 dead French construction workers strewn about the jungle.