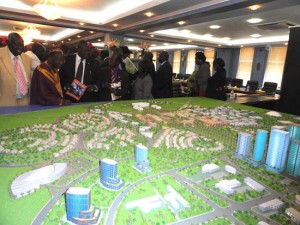 Though South Sudan remains a predominantly rural country, its urban areas—particularly Juba—are growing rapidly. Juba, the country’s largest city and its current capital, is estimated to house nearly 400,000 people, twice as many as in 2005. Years of civil war devastated the city’s infrastructure and drove many of its residents to seek safety in neighboring Uganda, but with the return of stability people are returning in droves. As the southern terminus of Nile River water traffic and home to South Sudan’s best international airport, Juba appears ready to serve as the focal point for future economic growth in the region. Nevertheless, South Sudan’s government plans to go through with a proposal put forward last year to move the country’s capital 125 miles north to what is now the rural location of Ramciel.

The move is projected to cost $10 billion and take twenty years. Water, sewage, and electrical systems will all need to be built from scratch, transportation connections to the region are severely limited, and the construction of governmental buildings has yet to begin. Critics both within South Sudan and in foreign governments have blasted the relocation plan for its costs, which they see as overly extravagant given the country’s current state of poverty. Government officials defend the plan on the grounds that jurisdictional disputes with Juba’s state government, the general chaos of the city, and limited availability of space for expansion all make eventual relocation a necessity.

Should the plan be brought to fruition, South Sudan will become the latest addition to the ranks of countries with purpose-built capital cities. Most such cities are based on sterile designs full of wide-open spaces and monumental architecture that might look good from a bird’s eye view, but which tend to be forbidding on the ground, as is the case with Myanmar’s Naypyidaw and Brazil’s Brasilia. Detailed plans for the new city are difficult to find, but if photos taken of model versions of the city are any indication, Ramciel promises to be another aspirational addition to this genre of architecture and city planning. Pictures tend to emphasize wide streets, grassy fields, geometric patterns, and modernist buildings. Such a city would be the antithesis of Juba, whose years of weak governance have resulted in a very spontaneous kind of urban form. Though such spontaneity can be beneficial in measured doses, the scale of Juba’s growth has fueled dangerous chaos in the past. Last March, several people died in a land dispute between tribal groups in the city during violence that forced President Salva Kiir to call up security forces to deal with the fighting.

Though most of South Sudan’s people are small-scale farmers, government revenue—and by extension the country’s ability to provide education and infrastructure—is almost entirely dependent on oil revenues. Since South Sudan needs to export most of its oil through its longtime enemy (North) Sudan, oil income is highly unreliable. Oil production in South Sudan has been almost entirely shut down since January due to political disagreements with the North over how to divide revenue, and as a consequence the country is almost bankrupt.

Despite South Sudan’s dire fiscal situation, proponents of the move to Ramciel in the government remain undaunted. In an interview with Reuters, Minister for Housing and Physical Infrastructure Jema Nunu Kumba said that “the only option was to go to a complete new place where the government can be able to design the city as it wants, and also to avoid confrontation with local people and the stakeholders.” Avoiding confrontation with local stakeholders is always a tempting prospect for bureaucrats, especially those attempting to build an iconic new city for a new country. But whether $10 billion—almost a year of South Sudan’s GDP and about $1,250 per South Sudanese citizen—is a fair price for avoiding such confrontation remains to be seen.