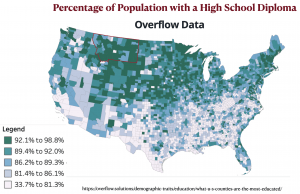 Education levels vary widely across the United States, as can be seen on the map to the left. (Unfortunately, this map of high school graduates has an extremely broad lowest category, reducing its utility.) The patterns seen here are relatively simple. Low rates of high-school education are found across the rural southeast, and particularly in Kentucky. Agricultural counties in the West that have large populations of farm workers also have low rates of educational attainment. In contrast, rural counties in the Midwest and Rocky Mountains characterized by ranching and mechanized farming generally have high levels of secondary-school graduates.  Basic educational attainment rates are also high across most of the north, as well as in suburban counties across the county. 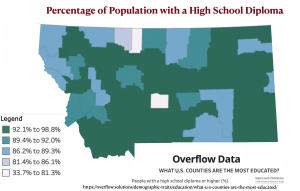 Overall, Montana is shown as having a high rate of secondary school completion, but county-level variation is pronounced. Few clear patterns are apparent on the map, and some of the information is curious, such as the lower educational levels found in two small counties (Liberty and Wheatland). Intriguingly, Montana counties with large Native American reservations all fall in middle category. 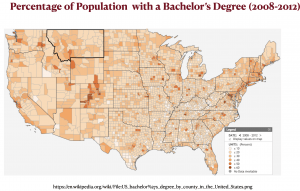 As is apparent on the third map, the United States is much more geographically differentiated when it comes to college education. Here the north/south divide is less glaring, although still visible. What stands out is the high percentages of bachelor’s degrees in three different geographical categories: affluent urban and suburban countries, especially those associated with tech hubs; non-metropolitan countries with major universities (typified by adjoining Whitman County in eastern Washington and Latah County in northwestern Idaho); and affluent high-amenity rural counties in the West (typified by Pitkin County, Colorado).

Montana’s rates of college completion are relatively high. Even many of the state’s sparsely populated agricultural counties have at least mid-level rates. Gallatin County in the southwest stands out for its elevated figure. Not only is Gallatin the home of Montana State University, but it is also becoming a small tech hub. More recently, it has attracted many well-educated remote workers, as discussed in previous posts. 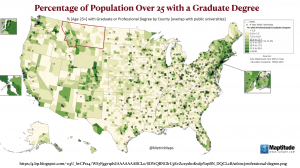 Patterns similar to those found on the college-completion map are apparent on the map of graduate and professional degrees. A few seeming anomalies, however, stand out. I was perplexed, for example, by the dark green polygon in a remote corner of west Texas: Jeff Davis County (population 1,996). As it turns out, Jeff Davis is the site of the McDonald Observatory, a major scientific institution. Presidio County, just to the southeast, also ranks surprisingly high on this map. The answer to this puzzle is found in the county seat of Marfa, which, despite its small size (1,600), is a “cultural center for contemporary artists and artisans.” In 2012, National Public Radio described Marfa as “An Unlikely Art Oasis in A Desert Town.” (But although it is indeed an “unlikely art oasis,” Marfa is not a “desert town”; receiving over 15 inches of precipitation annually, its climate is distinctly semi-arid.) 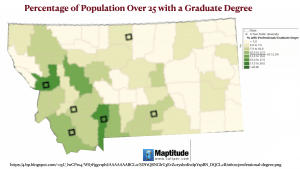 Three Montana counties stand out on the map of advanced and professional degrees: Missoula, Gallatin, and Lewis and Clark. The first two are the homes of the state’s two major universities, and the third contains the state capital, Helena.