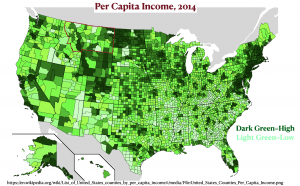 Although out-of-date and without a numerical scale, Wikipedia’s map of per capita income in the United States reveals some interesting patterns. As would be expected, income levels are high in major metropolitical areas (particularly in their suburban countries) and across the northeastern corridor extending from southern Maine to central Virginia. Western amenity counties also stand out, particularly Blaine County, Idaho, home of the Sun Valley ski resort. Many energy-producing counties also rank high, as can be seen most clearly in western North Dakota. North Dakota as a whole also ranks high, as does Wyoming. Agricultural counties in the northwestern Midwest tend to have higher per capita income levels than those further to the east; compare, for example, Iowa and Indiana. Low income levels are concentrated in rural counties in the South and in agricultural counties in the West that are home to large numbers of farm workers. Most counties with large Native American reservations also rank low. 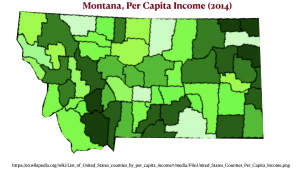 The Montana map of per capita income yields some surprises. In 2014, Gallatin County, now the state’s center of wealth, ranked only in the second tier, with several lightly populated rural countries in the southwest and northeast falling in a higher slot. Relatively large payrolls from mining operations help explain some of these seeming discrepancies. The high figure posted for Jefferson County, located to the northwest of Gallatin, may be connected to its Golden Sunlight gold mine. High income levels in northeast Montana might be linked to the oil economy of western North Dakota. Still, to find Daniels County, ranked as the most rural county in the U.S. in 2000, in the top tier is surprising. Low income levels in Montana are concentrated in counties with large American Indian populations. Many rural counties in the Great Plains also rank relatively low. Overall, Montana is characterized by large gaps among its 56 counties. 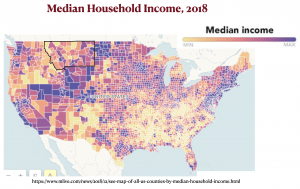 The maps of median household income are similar to those of per capita income, but with some interesting differences. Much of Utah, for example, ranks higher on the former map than on the latter, reflecting the state’s relatively large families. The oil-rich Permian Basin of west Texas 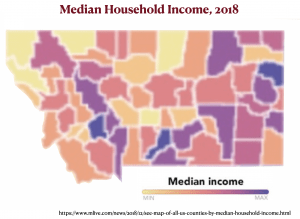 stands out clearly on the national map. In Montana, Stillwater County in the south-center surprisingly falls in the top tier. The Stillwater and East Boulder platinum and palladium mines, with a workforce of almost 3,000, probably plays a major role here. These mining operations are also carried out in neighboring Sweetgrass County, which, as we shall see below, has the state’s lowest poverty rate. 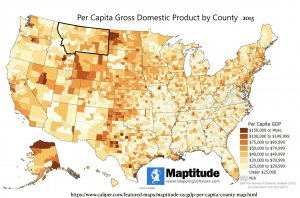 County-level per capita GDP maps are often misleading, as a single facility can make a lightly populated county look wealthier than it actually it. Several high per-capita-GDP rural oddities on the national map reflect productive mining and energy-drilling operations. Eureka Country Nevada, prominent on this map, is the site of the Mt. Hope Molybdenum Project, which contains “one of the world’s biggest and highest-grade molybdenum deposits.” In Montana, Rosebud 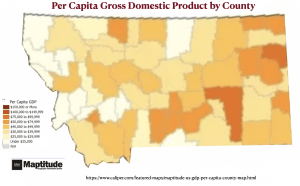 County, the site of major coal-mining and power-generation operations, stands out. Rosebud does not, however, rank high on per capita income map, mostly because income levels are low on the Northern Cheyenne Reservation, mostly located in the county. Surprisingly, many western Montana countries rank quite low on this map, which is partly a reflection of their large number of retirees. 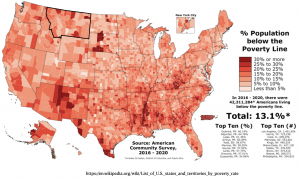 The patterns seen on poverty-rate maps are familiar, requiring little explanation. Montana counties range from the top to the bottom tier. Those with high levels of poverty all have major Native American communities. I was surprised that the poverty rate in Yellowstone County is as l 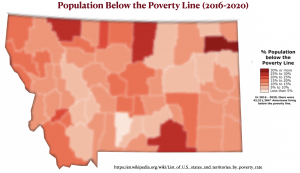 ow as it is, as Billings has a reputation elsewhere in Montana as a rough town with relatively high crime and poverty rates. Note that in nearby Sweetgrass County the poverty rate falls below five percent 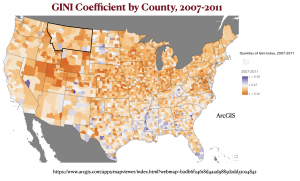 Finally, maps of the GINI Coefficient give a sense of income disparities. On the maps posted here, red coloration indicates relatively small income gaps while purple indicates relatively large ones. (If the GINI coefficient is “0,” all residents have the same income; if it is “1,” one person earns everything.) In the United States as a whole, the highest GINI figures are found in some of the richest states (New York, Connecticut, California) and in some of the poorest (Louisiana, Mississippi), while the lowest figures are found in the Western states of Utah, Idaho, and Wyoming. The LDS (Mormon) Church runs extensive economic programs for its members, which help account low GINI figures in Utah and Idaho.  County-level maps do not convey these GINI patterns very well, however, mostly because the largest gaps tend to be found in major cities that disappear in the county matrix. 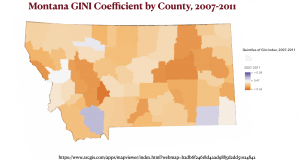 In overall-terms, Montana  falls near the middle on the GINI rankings.It is not surprising that Madison County in southwest Montana has a strikingly high GINI figure. This particularly scenic rural county has been attracting high-income earners for several decades, driving up housing prices and forcing many local people out of the market. Why Powder River County in the southeast would post such a high figure is a bit of a mystery. But with only 1,694 residents, it would not take many high earners to skew the number upwards. On the Wikipedia’s list of notable residents of Powder River, three of the four persons noted gained their fame in rodeo competitions, but it seems unlikely that this would be a major factor in its GINI ranking. Owners of oil and gas leases are probably more important. It is interesting that the sparsely settled counties of eastern Montana post both high and low GINI figures.