This penultimate post on county-level maps of Montana and the rest of the United States examines some basic demographic patterns. We begin with sex ratio, as measured by males per females in the population. The national map shows some clear patterns, but they are not always easy to interpret. Sex ratios are high (more males than females) in the interior West and the northern and western Midwest, and are low (more females than males) across much of the lower south, in most of New England, in most major metropolitan areas, and in many counties with large Native American communities. Some of these patterns can be explained by employment opportunities. It is no surprise, for example, to see male-biased populations in the Bakken oil lands of western North Dakota or in the Permian Basin of west Texas and southeastern New Mexico. If anything, I would have expected higher figures in the latter place. Most outdoor-amenity counties in the West also have high sex ratios.

The map of sex ratios in Montana is especially difficult to interpret. The Blackfeet nation in Glacier County has a very low ratio, but not so the Native American communities of Roosevelt County in northeastern Montana. Gallatin County has a high sex ratio, as might be expected in a booming community with large number of construction jobs, but equally booming Flathead County has a low sex ratio. By the same token, some languishing Great Plains countries have high sex ratios, others low. 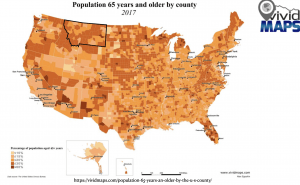 On the national map of the population over the age of 65, high levels are seen in counties with large numbers of retirees (parts of Arizona and much of Florida) and in those with declining populations marked by the out-migration of the young. Low levels or elderly people are found in counties with high birth rates and low longevity figures, and in those that attract large numbers of workers. Western counties with many farm workers, such as those in California’s San Joaquin Valley, have low proportions of residents over the retirement age. In Montana, the richest county (Gallatin) has a relatively low number of elderly residents, as do the state’s poor Native American counties. Why Prairie County in the east would have such a large percentage of elderly residents is 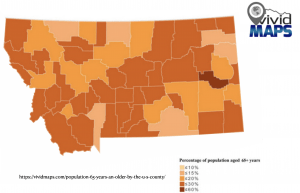 a mystery. In 2010, its median age was 53.6. If more than 60 percent of its population was really more than 65 years-of-age in 2017, as the map indicates, there must have been some major changes in the intervening period. 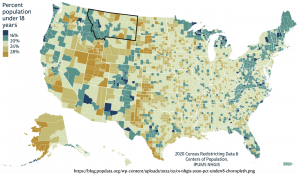 The national map of the population under age 18 is in large part a reflection of birth rates. Here the LDS (Mormon) region of Utah and eastern Idaho stand out, as do many areas with large Hispanic populations. In Montana, counties with Native American reservations have high percentages of residents below 18 years-of-age. Western counties that attract retirees or young 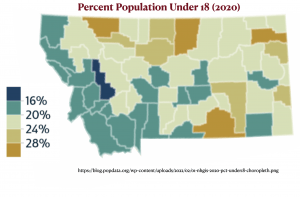