As one of the maps in the previous post shows, cannabis (marijuana) use is higher than average across most of the Western states – with the signal exceptions of Utah, Idaho, and Wyoming. Not surprisingly, these are the only Western states in which non-medical cannabis use remains illegal. Cannabis legalization began in the West (Colorado and Washington) but is now more firmly instituted in the Northeast. In general, this pattern reflects political inclinations. The Northeast is a generally Democratic-voting region, and Democrats are much more likely to support legalization than Republicans. According to a 2021 Gallup poll, 83 percent of Democrats support legalization, as do 71 percent of independents. Republicans, by contrast, are almost evenly split, with 49 percent opposing legal status. 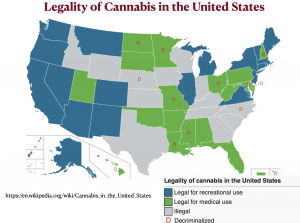 Only two reliably Republican-voting states have fully legalized cannabis: Montana and Alaska.  It is not coincidental that both are in the West. Western conservatism leans in a more libertarian direction than Southern or Midwestern conservatism, with the important exception of the deeply religious LDS (Mormon) region centered on Utah and eastern Idaho. Although cannabis is now allowed across Montana, sales are prohibited in counties that opposed legalization. These counties can hold their own referendums on retail sale. 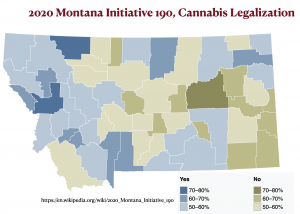 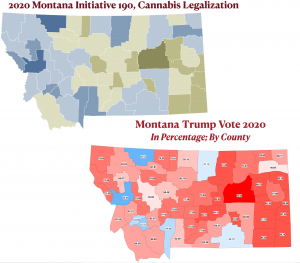 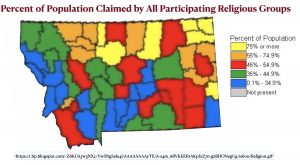 Differences in religiosity might help explain these patterns. As the Gallup poll also shows, people who regularly attend religious services are less likely to support cannabis legalization than those who do not – although a bare majority of regular attendees (52 percent) still favor legality. As it turns out, western Montana is less religiously inclined than eastern, and especially northeastern, Montana. In the northeast, heavily Republican but cannabis-supporting Valley County is distinctly less religious than its neighbors. But other countries defy this pattern, including deeply religious but legalization-supporting Sheridan County and heavily non-religious but legalization-opposing 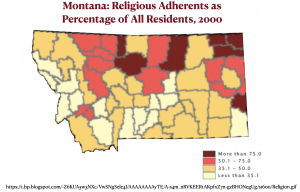 Religious affiliation across Montana will be considered in more detail in the next post.