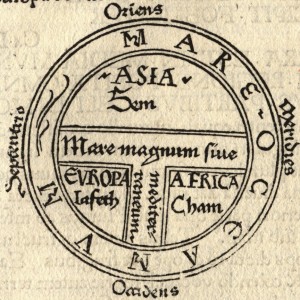 Through the 1700s, most European scholars understood human diversity primarily through the story of the dispersion of the sons of Noah—Shem, Ham, and Japheth—recounted in Genesis 10. Thus, when William Jones determined that Sanskrit, Latin, Greek and other languages of Europe, Persia, and India were related, he tried to fit this pattern into the Biblical narrative, specifically by arguing that the speakers of all of these languages were descended from Ham. This idea went against the established concept, which regarded Europeans as the progeny of Japheth and Africans as the descendants of Ham (see the medieval T-O world map posted to the left). To Jones, the “Japhethic” peoples were rather the nomads of Central Asia and the Americas. (Traditional Jewish accounts, on the other hand, tended to associated Japheth with the north, Ham with the south, and Shem with the middle latitudes, as on the second map). 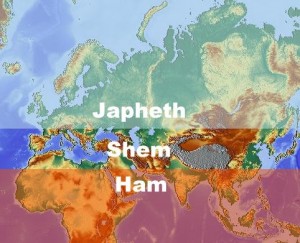 Subsequent work by historical linguists contributed to the discrediting of Biblical ethnography, and thus helped usher in the secular intellectual age. Christian fundamentalists who stress Biblical inerrancy, however, still believe that Genesis provides the key to understanding human linguistic and racial diversity. Yet their websites usually downplay Genesis 10 and the sons of Noah and instead focus on Genesis 11, which recounts the story of the Tower of Babel. In reading the relevant passages in the Bible, I am struck by their contradictory nature. I am curious about how these contradictions have historically been handed by both religious thinkers and scholars of human diversity operating in the Biblical framework. Why, in particular, did early European ethnographers stress Genesis 10 rather than Genesis 11?

The text of Genesis 10 seems to claim that descendants of the sons of Noah developed their own separate languages before the Tower of Babel was constructed, which would seemingly explain why early historical linguists stressed these passages. Genesis 10:20, for example, is usually translated into English as, “These are the sons of Ham, after their families, after their tongues, in their countries, and in their nations,” just as 10:31 is translated as “These are the sons of Shem, after their families, after their tongues, in their lands, after their nations.” As Asya notes, in the Hebrew original 10:31 reads “le-mishpaxotam li-leshonotam be-artzotam le-goyehem,” literally, “to their families, to their languages (PLURAL!), in their lands, to their peoples.” (The last word “goyim” is interesting in that in the Bible it means various peoples, as in “ethnic groups,” “ethno-linguistic groups”, “ethno-linguo-religious groups”, or even “clans.” “Nations” seems too big of a word. Over time, however, it came to signify “peoples other than the Jews.”)

Genesis 10 thus seems to claim that the original human language diversified as the descendants of Noah scattered across the world. In the initial passage of Genesis 11, however, a different picture emerges: “And the whole earth was of one language, and of one speech.” Such a single language, however, was “confounded” after the construction of the Tower Of Babel (Genesis 11:7). What then do Biblical experts think happened to the languages that had been spoken among the different lineages of Noah before the Tower was built? It is also unclear who actually build the tower, as the relevant Biblical passages do not specify the subject. As Genesis 11:2 reads, “And it came to pass, as they journeyed from the east, that they found a plain in the land of Shinar; and they dwelt there.” But who were “they?” Some modern fundamentalist websites claim that all of humankind gathered at Shinar to build the tower; as result, the scattering that occurred after Babel was destroyed and the single human language was “confounded” gave rise to subsequent human linguistic and racial diversity. In this interpretation, the early scattering of Noah’s sons and their progeny was of no lasting significance, as it had nothing to do with post-Babel linguistic differentiation. But if this is the case, why did Biblical ethnographers of earlier centuries stress Genesis 10 and the sons of Noah while downplaying Genesis 11 and the Tower of Babel? 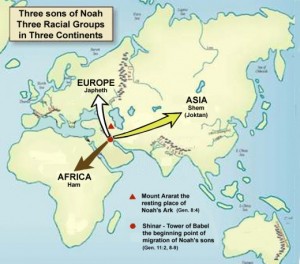 One interpretation, seen in the map to the left, claims that the scattering of the sons of Noah happened after the Tower of Babel incident, but this requires a reversal of the sequence of events as recounted in the Bible. Fundamentalist efforts to square the Biblical account with modern science can be quite involved: the diagram posted here, taken from the “Creation Wiki,” tries to fit the Noahic descent groups with a modern mitochondrial DNA tree diagram. I have not encountered the terms “Mrs Ham, Mrs Shem, and Mrs Japheth” elsewhere.