“South Korea is fighting a battle with China over ancient history using one of the most powerful weapons in its arsenal — sappy TV dramas watched by hundreds of millions of viewers in Asia.” 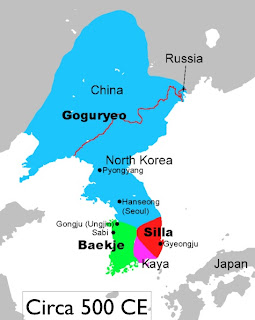 In 2006-7, however, the popularity of Korean shows plummeted across China, as nationalist suspicions came into play. South Korean screenwriters were accused of portraying the borderlands of southeastern Manchuria as historically Korean, whereas the Chinese government insisted that it had always been Chinese. Two shows, portraying respectively the founders of the northern Korean kingdoms of Goguryeo and Balhae, were banned by Beijing in 2007. South Korean nationalists responded online, “sparking a massive flame war between Chinese and Korean netizens.” As the Korea Times reported, “The falling exports of Korea’s cultural products are also attributed to China’s increasing hostility to Korea … [the] Chinese people began to believe South Korea tried to settle its historical views and even its cuisine culture through dramas, which nurtured antipathy toward hallyu …” 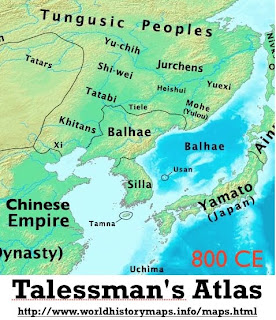 It is no coincidence that the Sino-Korean history spat would focus on Goguryeo and Balhae, two kingdoms whose territories spanned the border. Goguryeo (37 BCE-668 CE), from which the term “Korea” derives, has long been viewed as the locus classicus of Korean civilization. In South Korea it shares that position with Silla and, to a lesser extent, Baekje, but in North Korea it has no peer. Balhae (698-926 CE) is generally regarded as a less important successor state of Goguryeo, founded by one of its generals after the original kingdom fell to a Tang-Silla alliance in 668 CE.

Beijing objects to the classification of Balhae and Goguryeo as ancestral Korean states. In 2002, the Chinese Academy of Social Sciences launched the “Northeast Borderland History and the Chain of Events Research Project” to claim both kingdoms as its own. According to the zhonghua minzu ideology that underwrites the project, the Chinese nation encompasses all ethnic groups that have ever lived within the current boundaries of the People’s Republic of China. As the bulk of Goguryeo’s and especially Balhae’s territories lay to the north of the modern border, their history, the Academy insists, rightfully belongs to China.

From the perspective of contemporary historical scholarship, both positions in this “history war” are misconstrued. On the Chinese side, the notion of a pan-Chinese national identity infusing all of the country’s ethnic groups even today is problematic, as many Tibetans and the Uyghurs would surely attest. To contend that such conditions obtained in the distant past throughout China’s modern territorial extent is deeply anachronistic. Moreover, the Chinese Northeast Borderlands Project elides the inconvenient fact that (except for a brief period under the early Ming dynasty) the “borderlands” in question lay far outside successive Chinese empires’ reach until 1644, when China fell under the rule of the Manchus.

The Korean claims are more solid. But it is still a stretch to regard the kingdoms of Balhae and Goguryeo as straightforward political expressions of the Korean people. The aristocracy of Balhae is generally viewed as having been of Korean stock, but most of the kingdom’s people seem to have more closely related to the Manchus, speaking a language of the Tungusic subfamily of Altaic. Some scholars doubt the “Korean” nature of not just Balhae but also Goguryeo, arguing that the latter’s language was not an early form of Korean, and may have been more closely related to Japanese.

In the end, attributing any kind of modern-day entho-national category to pre-modern peoples or states is a troubling exercise. As Andrei Lankov explains, “Describing Koguryo [Goguryeo] as ‘Chinese’ or ‘Korean’ is as misleading as, say, describing medieval Brittany as ‘French’ or ‘English’ or ‘Irish’ (even though all three modern nations have something to do with the long-extinct Celtic duchy in what is now France). Europeans loved such things before World War I, in the days when the textbooks told about ‘our ancestors the Gauls.’ In East Asia, such historical nationalism is still a powerful instrument of politics and a source of deep and explosive emotions.”

Lankov goes on to offer a possible geopolitical rationale for China’s attempt to arrogate the history of Goguryeo. An impending collapse of North Korea, he argues, could force the “installation of a pro-Chinese puppet regime in Pyongyang. … Such actions will require psychological and cultural justifications, not least within China itself. Thus presenting what is now North Korea as an ‘ancient’ and ‘integral’ part of China might serve such interests very well.” Lankov’s thesis is intriguing, but seems unduly alarmist. China, after all, regards all polities that have ever occupied parts of its current national territory as intrinsically Chinese. Beijing’s historical project seems to be rooted in national consolidation, rather than potential expansion.