(Note: The next several posts will focus on the geography of Montana.)

As noted in previous posts, Montana is experiencing a population boom. Three decades ago, however, there was widespread worry about population stagnation and possible decline. Since becoming a state in 1889, Montana has experienced several demographic cycles, each marked by different geographical patterns. Geographer William Wyckoff has extensively documented these changes. In particular, I recommend his essay “Peopling the Last Best Place, 1870-1990,”* published by the Burton K. Wheeler Center at Montana State University at the time of lagging growth and concern about the state’s future. I will briefly summarize some of Wyckoff’s arguments before considering the more recent era of population growth. 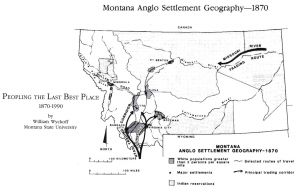 The early cycles of boom and bust, Wyckoff argues, were linked to economies of natural resource development, governmental investments, and climatic fluctuations. Prior to 1890, the non-native population was heavily focused in the southwestern part of the state, particularly in a handful of mining districts. As Wyckoff’s map of settlement in 1870 shows, southwest Montana at the time was linked most closely to Utah. A decade before the turn of the century, however, the settlement of the Great Plains in the east accelerated, propelled by railroad development, a series of relatively wet years, and high wheat prices. 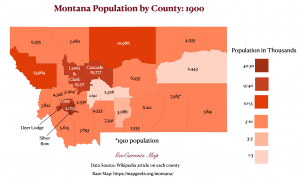 But as the map shows, Montana’s population in 1900 was still concentrated in the west, particularly in the four labeled counties. Far above the others was Silver Bow, containing the extraordinarily productive and profitable copper mines of Butte. Neighboring Deer Lodge, a copper-smelting hub, also stands out (its shuttered Anaconda Smelter Stack, at 585 feet, is the tallest surviving masonry structure in the world). Relatively large population clusters were also found in Lewis & Clark County, another mining center, and Cascade County, an emerging energy (hydropower) and transportation hub. Helena, in the former county, boasted of having the world’s highest concentration of millionaires (50 in a population of 12,000 in 1888). Cascade’s county seat of 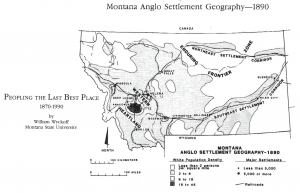 Great Falls exploded from 3,979 residents in 1890 to 14,930 in 1900. Gallatin County in southwest, with 9,533 residents, was the main agricultural region supporting the mining economy. As can be seen in Wyckoff’s second map, the Butte mining district had become the state’s demographic core by 1890. 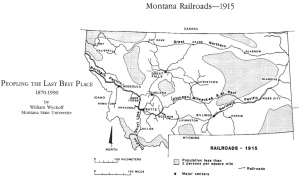 In the first two decades of the twentieth century, agricultural expansion transformed the Great Plains, at least in areas accessible to the rapidly growing rail network. World War I was an especially promising time. As a result, many eastern Montana counties were subdivided. Ironically,  the demographic cycle went into reverse just as new counties were proliferating. Drought struck in the late teens and returned periodically in the 1920s, a decade that did not roar in Montana; the state’s population dropped by 2.1 percent during this period. As Wyckoff notes, over half of Montana’s banks failed between 1920 and 1926. 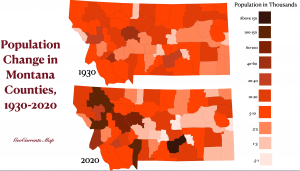 The agricultural boom of the period from 1890 to 1920 resulted in a far more geographically balanced population structure for the state as a whole. As can be seen on the 1930 population map, the mining district of the southwest were no longer dominant. We also see the rise of Yellowstone County and its key city of Billings, an emerging agricultural, energy, and transportation hub. Billings would surpass Great Falls as Montana’s largest city around 1970, and today has almost twice Great Fall’s population. 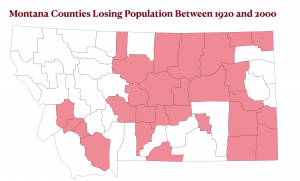 Moderate population growth returned to Montana in the post WWII period, with the 1950s and 1970s posting strong gains. With the exceptions of Cascade and Yellowstone countries, however, the Great Plains continued to stagnate. Agricultural mechanization reduced the need for labor, and the region’s harsh climate and remote location discouraged settlement. As Wyckoff notes, population growth in the post-war period was propelled by the forestry industries in the northwest, energy in the greater Billings and Great Falls area, and the early emergence of natural-amenities development in some of the more scenic valleys in the mountainous west.

In the 1980s, Montana’s population growth rate fell to 1.6 percent. As Wyckoff writes, “More than two-thirds of Montana’s 56 counties lost population, and the state’s struggling economy since 1980 prompted over 50,000 residents to leave.” Stagnation in a time of national economic growth generated concern, leading Montana State University to commission the study in which Wyckoff’s essay appears. But the situation would soon turn around. Montana’s population grew by almost 13 percent in the 1990s and by almost 10 percent in each of the first two decades of the new century. Much of this growth was focused on amenity-rich areas in the west. Of particular note are the two college towns of Missoula and Bozeman, home, respectively, of the University of Montana and Montana State University. Missoula County grew by almost 22 percent in the 1990s, while Gallatin County, where Bozeman is located, posted a gain of more than 34 percent. As Montana State University increasingly emphasized science and engineering, Bozeman emerged as a regional tech hub, contributing to population gains of more than 30 percent in Gallatin County during both the 2000-2010 and 2010-2020 periods.

The 2020 map of population by county again reveals a stark demographic divide, especially when contrasted with the map of 1930. With the exceptions of Yellowstone (Billings) and Cascade (Great Falls) counties, the Great Plains remains very sparsely settled. Most of its counties had larger populations in 1920 than they do today, and several have fallen below 1,000 residents. Population is now concentrated in the west, but even in western Montana most countries have small populations and have experienced little growth. That situation is perhaps changing, however, as exorbitant real estate costs lead many people to seek housing outside of the region’s booming cities, especially Bozeman. Many other parts of western and central Montana have excellent natural amenities, and thus appeal to those who value outdoor experiences.