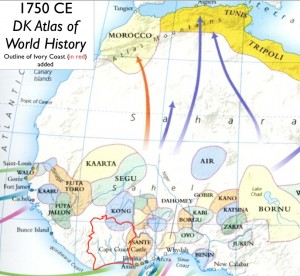 The entangled roots of the recent crisis in Ivory Coast extend back to the pre-colonial period. For several hundred years before the imposition of French rule in the late 1800s, the area now known as Ivory Coast contained both relatively centralized, hierarchical kingdoms and decentralized societies organized around kinship lineages. The kingdoms were located in the east and the north, associated with centers of state-formation outside of the boundaries of current-day Ivory Coast. Those in the north were linked to the Muslim kingdoms of the Sahel, particularly the great medieval empire of Mali. Those in the east were associated with the Akan people, whose Ashante Empire dominated most of what is now Ghana.

Much of Ivory Coast was a backwater relative to the more important core zones of West African trade and political consolidation. The southwest was characterized by small-scale societies with little integration beyond the village level. The entire coastal region, moreover, engaged in much less trade with Europeans than areas further to the east. The “Ivory Coast” was a good location for tusks until local elephant herds were exhausted in the early 1700s, but it lacked harbors suitable for European ships. The eastern coastal strip was cut off from its hinterland by surf-pounded barrier islands, behind which lay a complex network of lagoons and swamps. The western coast was also largely by-passed by European merchants. Due to its relative isolation, the Ivory Coast suffered much less from the slave trade than Ghana or Nigeria, although local residents were sometimes recruited or enslaved to serve on ships. In fact, some scholars suggest that the linguistic term “Kru” was derived from the English word “crew.” 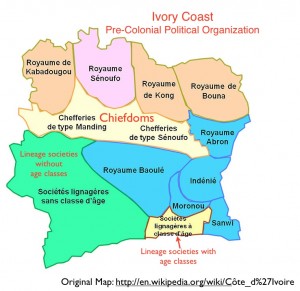 The 17th and 18th centuries saw important political changes. Mali was essentially finished by 1600, but the heritage of centralized authority, along with strong Islamic institutions, persisted in the north. By the early 1700s, the Kong Empire, founded by members of the Dyula trading diaspora with roots in Mali, was spreading its power over both Muslim and animist peoples of the north-center. The undated Wikipedia map (in French) of pre-colonial polities shows a series of seemingly equivalent kingdoms (royaumes) across the north, but none could compare with Kong. (The so-called “Senoufo kingdom” is more aptly classified as a cluster of chiefdoms.) Significant transformation also marked the east, where the expanding Ashante Empire forced out Akan groups that refused to submit. Fleeing to what is now Ivory Coast, the Akan spread both their languages and their political systems, based on royal authority and social hierarchy. (On the Wikipedia map, the five Akan kingdoms are coded in blue.) The strongest of these kingdoms turned out to be that of the Baoulé people, who resisted French rule strenuously in the late 1800s. The Baoulé emerged out of a union of Akan immigrants and the indigenous population of the central region. Baoulé institutions deviated from Akan norms in several respects, which enhanced local ethnic solidarity—one of the key ingredients of Baoulé political success in the post-colonial period.

In sum, before the establishment of French power in the 1880s and 1890s, the two zones of state-level organization in Ivory Coast were highly distinctive. The northern states—although not all of the northern peoples—were Muslim, closely linked to Islamic trade networks and scholarly circles based in the Sahel and stretching across the Sahara. The eastern kingdoms, by contrast, were animist in religion, and had a social heritage of matrilineal organization (tracing descent through the female line). They also had much closer links to European merchants.

The expansion of French imperial power at the end of the 1800s brought vast changes, creating Ivory Coast as a political unit. In doing so, it cut through the territories of indigenous states and ethnic groups all along its borders. French authority also rearranged the power dynamics of the entire region, enhancing the significance of the southeast while undermining that of the north. 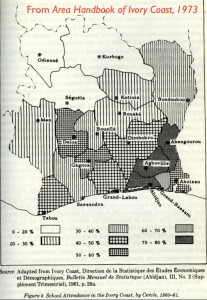 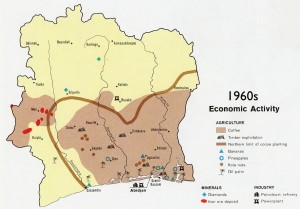 Throughout the colonial period (1893-1960), French influence tilted to the south and especially the southeast. In part this was a simple matter of proximity to the colonial settlements on the coast, especially Abidjan. But it is also true that southern (and especially southeastern) Ivorians took to French education more readily than northerners. Education in the north had long been linked to Islam, encouraging cultural resistance to the Europeans. As can be seen in the map, primary school attendance had reached more than 70 percent over much of the southeast by the end of the colonial period, yet the rate was below twenty percent in the northwest. Economic development acted as another wedge. As cacao emerged as Ivory Coast’s economic mainstay, the north lost out, being climatically unsuited to the crop. As the cartoonish economic map posted here shows, most modern commercial activities were concentrated in the greater southeast. Colonial engineering further accentuated the divide, as France embarked on a massive project in 1936 (completed in 1950) to cut though the sand bars and barrier islands and thus link the lagoons to the sea. As recounted in the 1966 work, Africa, a New Geographical Survey*:

This Vridi Canal is [1.75] miles long, 1,000 yards wide, and the channel and lagoon give a 45-foot depth for shipping. The economic effect was immediate: trade increased threefold, a range of industries became attracted, and Abidjan’s population (24,000 in 1937) is now well over 200,000.

French colonial developments thus enhanced the positions of Kwa-speaking peoples of the southwest, including the centralized Akan peoples of the inland zone and the lineage-based Lagoon Complex along the coast. With independence in 1960, predominant political power passed to the Baoulé people of the center, with the greater southeast retaining economic primacy. The north (and to a lesser extent the southwest) remained marginalized.

Such political and economic dynamics were to play a major role in the unrest that engulfed the Ivory Coast after the turn of the millennium. The Kwa-speaking peoples of the southeast had come occupy most positions of power, and they tended to look down on the poorer residents of the north as well as the tribal peoples of the southwest. Northerners, in turn, felt excluded and marginalized, a situation  especially galling to those whose ancestries linked them to the great Muslim empires and trading circuits on the past, and whose Islamic educations counted for little in the new country’s halls of power. After independence, massive migration streams from north to south and from the center to the southwest would further upset the precarious post-colonial balance, as we shall explore in the next post.