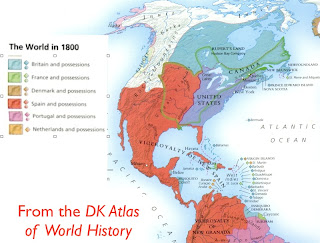 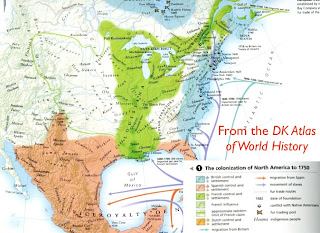 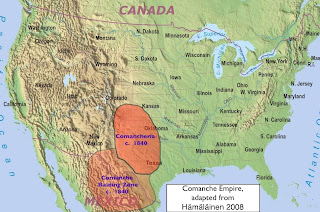 Historical maps of colonial North and South America are often misleading. Many cartographers portray vague claims to sovereignty by European powers as if they constituted actual control, while downplaying or flat-out ignoring potent indigenous polities. At its worst the result can be a cartographic caricature, revealing more about fantasies spun in London, Paris, or Madrid than about power on the ground in the Americas.

Consider the first two maps posted above, excerpted from the innovative and comprehensive DKAtlas of World History. “The World in 1800” depicts a solid swath of Spanish “possessions” extending approximately to the current U.S.-Canada border. Most of North America is cleanly divided between the United States and the Spanish, British, and Russian empires. In the uncolonized northwestern zone, only one indigenous polity is labeled – that of the Tlingits – and it is misplaced (too far to the south). Three additional tribes are shown, of which two are likewise misplaced: the Utes (too far to the north) and the western Inuits (too far inland). The second DK map, “The Colonization of North America to 1750,” is better, not least because grandiose Spanish claims beyond New Mexico are simply left off the map. A sizable number of native groups are shown, with those in the south depicted as falling under Spanish control. Note that the Comanche territory is shown as lying wholly within the zone of Spanish power, rendering the Comanches (in cartographic code) as a subdued or client people.

In actuality, Spanish power in 1800s was perilously thin north of the Rio Grande. Feeble Spanish authority was exercised in north-central New Mexico, southern and central coastal California, and the area around San Antonio in Texas. Spain also exerted some authority over the modest former French outposts in the Mississippi Valley. But most of the northern area colored red on the map had not even been explored by Spaniards, much less settled or subdued. What is mapped as an empire here was little more than a conceit.

Spain’s delusions of imperial authority are exposed in one of the more remarkable books of American history to appear in recent decades, Pekka Hämäläinen’s Comanche Empire (Yale University Press, 2008). Winner of four book awards (including the Bancroft Prize for the best work in American History), Comanche Empire forces us to reconceptualize the geography of power in central North America during this period. In Hämäläinen’s gripping account, the Comanches ran a powerful political and economic organization that was more than able to hold its own against European settlers and soldiers. By the late 1700s, the outposts of Spanish sovereignty in New Mexico and Texas were forced to deal with Comanche chieftains as diplomatic equals, and were in some ways allowed to exist at all only at the sufferance of the local warlords. The Comanche language was emerging as a lingua franca of a broad region, and was increasingly spoken by Hispanic settlers in Taos. From the mid 1700s through the mid 1800s, the tribe’s vast realm, “Comancheria,” extended from the Arkansas Valley in southeastern Colorado to the Balcones Escarpment in central Texas.

According to Hämäläinen, Comanche power figured prominently in the expansion of the United States into the Southwest. Spanish-speaking settlements in Texas had been so devastated by Comanche raids that the Mexican government felt compelled to open the struggling colony to Anglo settlers. The newcomers subsequently rebelled and established the short-lived Texas Republic. Under the leadership of Mirabeau Buonaparte Lamar, the Texans vowed to remove or exterminate the Comanches in 1838, but the resulting war proved mutually destructive. When Sam Houston regained the presidency in 1841, Texas and Comancheria reached a settlement. Henceforth the Comanches would turn their pillaging energies on northern Mexico, while trading peacefully with Texas. Comanche raiders eventually penetrated deep into central Mexico, returning with vast herds of stolen livestock. Horses and mules were in high demand in the United States, ensuring profits for the Native suppliers and providing American farmers with cheap stock. But the Comanche forays devastated much of northern and central Mexico, clearing the way for an easy U..S victory in the Mexican-American War of 1946-1848. As Hämäläinen puts it:

The US take-over of the Southwest was significantly assisted by the fact that the Comanches and the Apaches had already destabilized Mexico’s Far North. Apaches had devastated vast stretches of northwestern Mexico, but Comanches left the deepest imprint. In each major stage of its expansion, the United States absorbed lands that had been made ripe for conquest by Comanches, who themselves were not interested in direct political control over foreign territories. (p. 233)

Comanche Empire has been faulted for conceptualizing the Comanche realm as an empire. The Comanches did not build a conventional state apparatus; they had no bureaucracy or permanent governmental institutions. Nor did they rule directly over subject peoples, as empires are wont to do. But they did extract tribute, and they did conduct sophisticated diplomatic maneuvers. Comancheria was reminiscent in many ways of the early nomadic polities that arose on the great grasslands of Eurasia, “tribal confederations” that raided, traded with, and often held power over the sedentary peoples living in adjacent areas. Over time, many of these pastoral aggregations developed into genuine states and empires, the Mongols being the prime example. One can only imagine what might have happened in North America if European immigration and technological development had come to a halt around 1800. Under the right conditions, the evolution of a full-fledged nomadic Comanche Empire seems entirely plausible—a scenario worth exploring in counterfactual history.