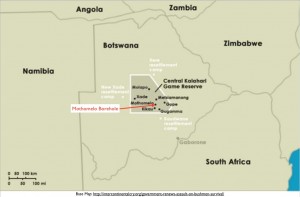 Botswana is often lauded as sub-Saharan Africa’s greatest success, noted for its well-run government, low levels of corruption, and high levels of human well-being. Rather than enriching a narrow elite, its rich deposits of diamonds have underwritten broad-based national development. Botswana is also known for its spectacular wildlife and dedication to conservation, with eighteen percent of its land protected in national parks and preserves, and another twenty-three percent in wildlife management areas.

In regard to indigenous rights, however, Botswana’s record has not been so good. Some sources go so far as to accuse it of committing “slow genocide” against the San (Bushmen), the physically and linguistically distinctive hunter-gatherers of the Kalahari Desert. Roughly a decade ago, Botswana expelled San groups from the vast Central Kalahari Game Reserve, capping water wells to help enforce the policy. But thanks to recent legal decisions, the position of the San is improving. Early September 2011 saw the reopening of the Mothomelo borehole (well), allowing some Bushmen to leave resettlement camps and return home. The move was widely heralded as a victory for indigenous people by Survival International, an NGO that had long been involved in the case.

Loss of land is nothing new for the San. They and related peoples occupied all of southern Africa in ancient times. Beginning some 1,500 years ago, iron-wielding, agricultural, Bantu-speaking peoples gradually drove them into the southeastern corner of the continent; 400 years ago, growing European settlements increasingly limited them to the harsh lands of the Kalahari. In the waning days of empire, British agents finally grew concerned about the plight of the San. The vast Central Kalahari Game Reserve (CKGR) that they established in 1961 was designed to protect the San as well as the wild habitat that they depended on. After gaining independence in 1966, however, Botswana emphasized economic growth over cultural preservation, and the hunter-gatherer mode of life came to seen as incompatible with national developmental goals. Diamond discoveries in the central Kalahari in the 1990s seemingly settled the issue, leading to mass expulsions. Forced out of their ancestral lands, many San ended up in resettlement camps, dependent on aid; others took on periodic menial employment in Botswana’s commercial ranching sector. Survival skills diminished as alcoholism and associated social ills mounted. 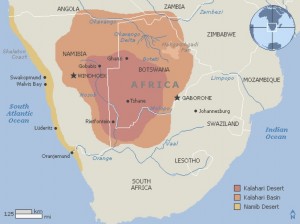 It is no surprise that water has been at the center of the recent controversies, for the Kalahari is a parched land. Despite its name, the Kalahari is not technically a desert, as a several-month rainy season allows plentiful plant life. But the region lacks surface water; the rain that does fall is either absorbed by the vegetation or sinks into the thick sands that mantle its entire extent. To deal with this scarcity, deep wells have been drilled over much of Botswana, bringing groundwater to the surface. Such boreholes were built to extend the range of cattle ranching, to allow mining, and to enhance wildlife. But they have also benefitted the region’s indigenous inhabitants. Although the San know how to extract meager amounts of water from the natural environment, they soon became dependent on the abundant supplies yielded by the wells. Some groups acquired goats and began to take up a pastoral way of life, increasing their reliance on groundwater.  In the meantime, the Kalahari’s boreholes contributed to overgrazing and soil erosion, as well as groundwater depletion.

Controversies surrounding the Mothomelo borehole have reached the attention of an international audience. Located in the Central Kalahari Game Reserve, Mothomelo provided abundant water for a small community of San foragers transitioning to goat herding. In 2002, however, the well was capped as part of an effort to force the San out of the area so that it could more easily be developed for diamond mining. In 2006, a Botswana court ruled the eviction illegal, allowing a few San to return. Without access to the well, however, they were only able to collect scanty supplies of water in the traditional manner from wild melons and sand-pits. Further travails ensued in 2009 when the government confiscated the community’s small herd of goats, claiming that domesticated stock is inappropriate in a national game reserve. The lot of the San markedly improved in early 2011 when a Botswana appeals court ruled that they possessed rights to subsurface water, allowing the reopening of the Mothomelo borehole in early September. As Survival International reports, “Bushmen are already returning to the area and have been bathing in the water.”

After the government decided to evict the San from the Central Kalahari Game Reserve in 2002, Survival International began to apply pressure on De Beers, the international diamond syndicate that held the mining concession. Such negative publicity, Survival International claims, convinced De Beers to sell its interest to Gem Diamonds. As Botswana’s courts began to acknowledge indigenous rights, Gem Diamonds sought to accommodate the San. Working with the charitable NGO Vox United, it refurbished the Mothomelo borehole, installed new solar pumps, and pledged to donate three new wells to the indigenous community. (Thus far, additional boreholes in the vicinity have yielded water too salty for drinking.) Having addressed the human rights issue, Gem intends to proceed with its mining venture, hoping to profit from diamond deposits worth an estimated US $3.3 billion. Survival International remains wary. As one spokesperson put it, “The mine will be very close to a community at Gope. So they are still going to have this huge mine, which is definitely going to affect the Bushmen quite negatively. But [at least] they will be giving the Bushmen water.”

Until recently, the entire Central Kalahari Game Reserve (CKGR) had been off-limits to visitors. Owing largely to its abundant wildlife, Botswana has developed a thriving tourism sector, and is now allowing and even encouraging eco-tourism in the CKGR. Such initiatives present both potential benefits and detriments to the local San. One the one hand, eco-tourism can provide a form of employment that relies on traditional knowledge that might otherwise disappear. Such work, however, can be demeaning, potentially turning tribal peoples into cultural mascots. As outlined in Africa Game Reserves:

Safari lodges based in various parts of the Kalahari often hire people of Bushman origin to guide visitors into the desert and to impart their wisdom of how to survive. Often dressed in traditional animal skins and carrying a bow and arrow, they show you how to find water-filled tubers in the sand  and explain how to catch an ostrich – which is no easy task! Bushmen are great storytellers and like nothing better than to embellish a tale with elaborate and hilarious demonstrations, accompanied by their fast and furious clicking language. At the end of the day they take off their working clothes – in this case animal skins – and go back to their village.

One can hope that the recent legal decisions in Botswana will allow the San to survive in their ancestral homeland. Whether eco-tourism in the Kalahari will prove a boon or a curse remains to be seen.