To nobody’s surprise, the border negotiations were held without a representative from Pridnestrovian Moldavian Republic, the de-facto rogue state that holds the east bank of the Dniester River, and some parts of the Western bank. In essence, the majority of the Ukranian-Moldovan border, as pictured here: 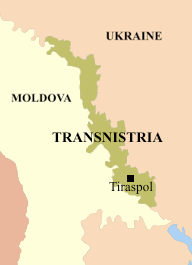 The state of Transnistria is recognized by only Abhkhazia and South Ossetia. Russian troops been stationed have occupied Transnistria since the end of the Transnistrian war of 1992. Transnistria has been effectively blockaded by both of its neighbors since, but it still holds vital territorial control over the Dniester River, Moldova’s corridor to the Black Sea.

Ukranian President Victor Yushenko, however, had to cancel his trip to ‘peg driving ceremony,’ to official demark the border, as PMR made it clear that he and his entourage were not welcome to mark a border, agreed on without their consent. Yushenko’s visit was subsequently cancelled by the PMR, who then threatened to interfere with the ceremony.

There is no love lost between Yushenko and the PMR, who are backed by Russian troops. After all, Russophiles have already given Yushenko a treatment of Dioxin poisoning. 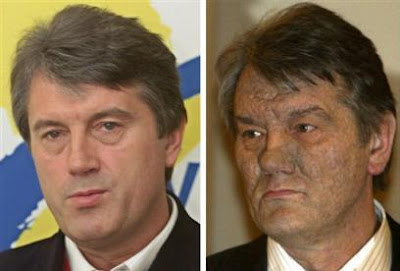 While the border confirmation talks have been pushed in their respective nations domestic press as a way to ensure for better protection for Ukranian Minorities in Moldova, and vice versa, the negotiations are trivial without any process on the Transnistiran issue. A breakthrough is unlikely, given the icy diplomatic relations between both Moldova and the Ukraine towards Russia.

The Transnistrian issue is complicated by a near even ethnic split between Moldovans, Ukranians, and Russians in the region, if you’re willing to believe the Transnistrian government.

The near 30-30-30 ethnic split on this chart, is decent evidence that we won’t see a clean resolution of this issue any time soon. Note that the elimination of Jews from the ethnic map, owes to the fact that Transnistria was a concentration camp during the holocaust.

Even with EU pressure to resolve this regional border dispute, it seems 2010 will be another year of political limbo for Transnistria. NATO resolutions in the past on the area, have not budged the conflict, and the Russian Military is unlikely to withdraw.

It’s hard believe that these recent discussions between the Moldovan and Ukranian parties could be anything more than a mutual acknowledgment of the political stalemate, or discussions on how to approach Russia, who “guarantees the protection of its citizens.” As shown here, this is a polarizing issue in the region.

But, if we take a step back, Transnistria has always been a source of geographical comic relief.Take a look at their government’s ten facts to boast about. If they only had more than ten.

Unfortunately for us, the West’s best window in to the Transnistrian calamity has recently closed. The Tiraspol Times, a Pravda styled, English language newspaper focused on Transnistria has ceased publishing. However, you can revisit the glory days of Soviet styled journalism, at through the Internet Archive’s Wayback Machine.

The now defunct press, and the coat of arms make Transnistria appear as if it is, in fact the last vestige of the Soviet Union. 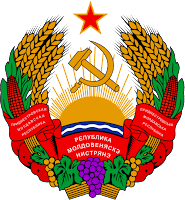 Scenic, Tiraspol, where the statue of Lenin still proudly stands in front of the capital. Looks like this going to be there for a while. At the very least, we can hope that the peace holds in Transnistria for another year. 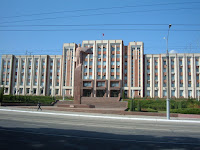