Skip to content
The group stage of the World Cup offered an opportunity for outliers on both ends of the spectrum of economic and population strength to compete on equal terms.
World Cup competitors have a mean population near 50,000,000 million. The median sits far below that at 22,578,572. The majority of the competing nations are of modest size, but the inclusion of hundred million plus superpowers like the USA, Brazil, and Nigeria significantly skew the mean. 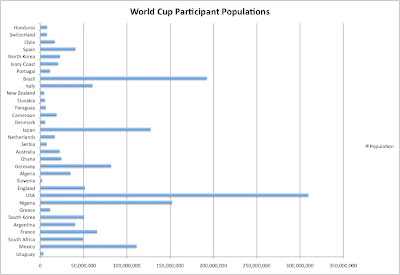 The discrepancies in Per Capita GDP, are a little more muted than those in population, but mismatches, such as Ghana’s $ 1500 overcoming the USA’s $45,000 a year advantage. Sixteen of the top 50 countries in Per Capita GDP are represented at the World Cup. Honduras, Cameroon, Ghana, Ivory Coast, North Korea, and Paraguay had the chance to at least quintuple their respective countries’ Per Capita GDP Earnings from the $30,000 per player bonus for advancing to the knockout stage.
The mean per capita GDP for a country competing in this years world cup stands at 20441.44 Centers, well above the world average. Still, the twenty fifth percentile in Per Capita GDP for world cup competitors stood at $7574 USD, which is fairly close to the worldwide median in this category. 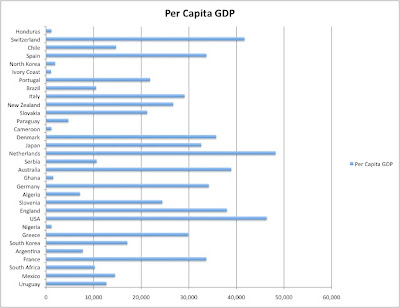 Now, considering the graphs above, take a look at the comprehensive performances of the participants in the World Cup during the Group Stage. 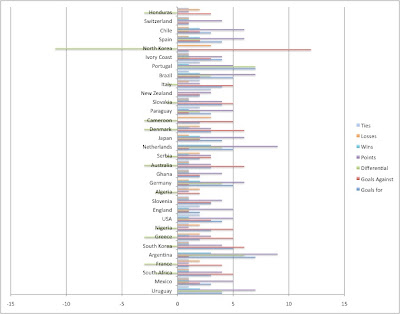 Which countries were the most efficient at producing goals per citizen? It seems the USA and Nigeria left far too many (goal)mouths to feed, while it takes the support of only a few thousand Uruguayans and Paraguayans are required to produce goals with their fascinating efficiency, well ahead of the world Average of 16976995 people per goal. 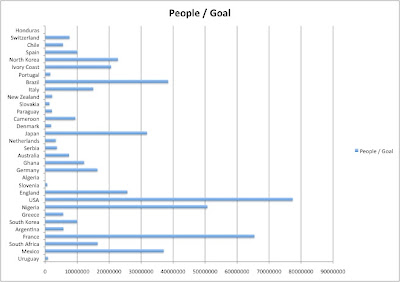 And how much, do we, the people, in theory pay to support these social structures that allow for these goals? The average citizen of a world cup participant nation earned 8361 dollars per goal their country scored. Not a bad haul, but it your country wasn’t scoring like North Korea, it may be off to the coal mines for a few years.
If Ghana can continue their impressive run, they’ll not only capture the hearts of all of Africa, but also cement their status as rather impressive statistical outlier, against the world’s remaining industrial superpowers and population centers. Its one of the few times where we can say that the world’s rich and the poor truly compete on a level playing field.
You can play with all the World Cup figures and selected CIA World Factbook information more in this spreadsheet. Feel free to import more data, and share your graphs and findings in the comments section. Bonus points awarded for the craziest regression line.