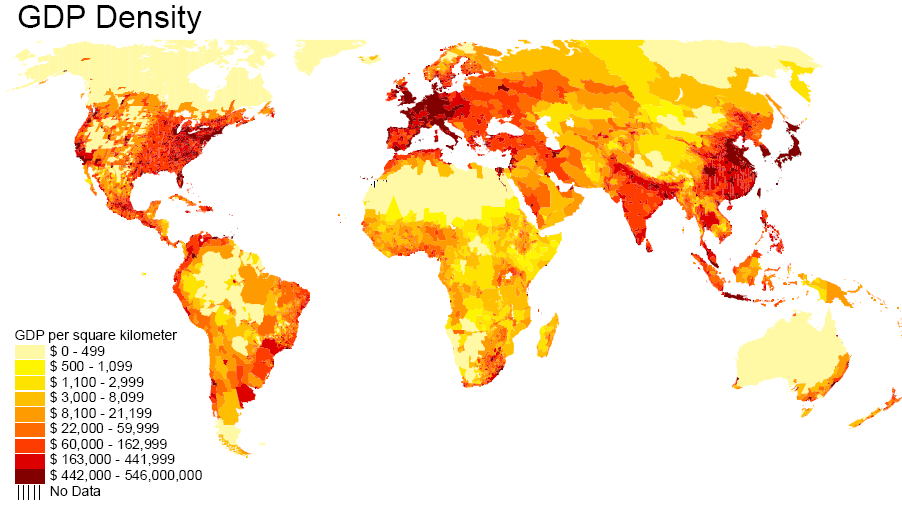 Calculations of economic development are usually separated from considerations of population and physical geography. The map above, which introduces the concept of GDP Density. This approach shows how much economic value is generated per unit of land. The map clearly displays not only which areas are the most economically productive, but it also shows that areas of extremely low population density produce relatively little, even if they are wealthy in per capita terms. Northern Canada and Alaska as well as the Australian Outback are thus mapped as having extremely low levels of GDP density. Although Africa overall is shown as having a low level of GDP density, several of its more densely populated regions are depicted as fairly productive. Other trends also stand out, such as the coastal focus of economic activity in South America. Finally, even though China and India are still relatively poor ”developing countries,” their huge populations help generate high levels of GDP density.

The map does, however, have a number of drawbacks and limitations. The data on which it is based are themselves problematic. GDP is calculated on a country-by-country basis, which leaves out regional inequalities within sovereign states. In India especially, huge economic disparities are ignored, which makes it appear as if Bihar were more economically productive than western Maharashtra just because it is more densely populated. Also, the level of resolution vastly varies across the map. For example, the United States is mapped largely at the county level, which provides a fairly detailed portrayal, whereas Russia is divided into much larger areas, mostly oblasts. As a result, Russia’s Arctic coastline is depicted as having much higher levels of economic activity than is justified. Finally, low-population areas that have highly productive mineral economies are left off the map. The mining zones of northwestern Australia, for example, produce a significant portion of the country’s wealth, yet one would never know this from the map.

This is my last post for Geocurrents, as my independent study on the geography of economic disparities has come to an end. While examining numerically calculated measurements of inequality, I concluded that although indexes can provide broad comparative insight about unequality among countries, it is very challenging to compare inequality between countries of different levels of economic development. In focusing on global inequality trends, I showed how the increasing prosperity of countries such as China is not evenly distributed; as a result, inequality within countries is becoming just as important as inequality between countries. However, as discussed by the Brookings Institution, although many countries are becoming richer and less egalitarian, failed states remain mired in relatively equally distributed poverty. Finally, I took a closer look at intra-nation inequality, specifically in Japan, South Africa, and the United States. All of these countries are characterized by different types of economic disparity, which interact with each other. In particular, I looked at three specific layers: regional disparities, the rural-urban divide, as well as the intricacies of wealth in urban areas. These layers exist everywhere, demonstrating the complexity and depth of economic inequality.

Although most of my Geocurrents entries delved into issues of economic inequality, I also took up two unrelated issues: the uprisings in the Middle East as foreseen by the Economist’s “Shoe-Thrower’s Index,” and national anthems and what they can tell us about their respective countries.

Finally, before signing off, I want to thank Professor Martin Lewis for his time and for being an enormous knowledge resource.