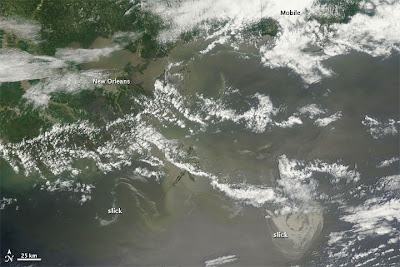 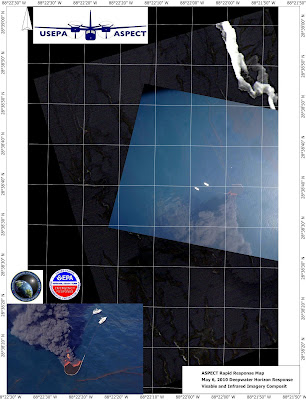 After last week’s dystopian projections on GeoCurrents, last Monday’s New York Times countered with unreasonably rosy projections. Good news sells papers. The article conveyed a sense of hope in its readers that the spill, was not as large as feared, and could be easily plugged as soon as this week. Their only quote from a so-called “Marine Biologist,” was, “The sky is not falling.”

Unfortunately, the rosy Monday articles were wrong, and their estimates on the breadth of the spill were embarrassingly low, based on faulty estimates fed to them from government agencies (see also: Iraq). Skytruth, for example, has found that initial official government and BP figures, widely quoted by the press, have been generated via ballpark estimate without proof. A NOAA Admiral is quoted, calling any estimation, “Impossible.”
Hate to break it to ya, Chicken Little, but the sky is falling. The proof can be found in the clouds of sludgy soot, bridging the ocean to the land. The proof can be found in the fact that the working environmental response plan, can be simplified as, “call us when you find dead stuff.” The proof can be found when even Al-Jazeera is sympathetic to this travesty. Just look at all the dead sea turtleswashing ashore.
The Reuters Factboxsince the spill, reads as a list of sequential failures, grand in scope and cost. The capping dome/containment system put in place days ago, has failed due to the buildup of ice-like Methane crystals / the inability to skirt the laws of physics. The rupture is more than five thousand feet below the surface of the sea, and must be accessed by these machines, as humans cannot survive at such depths.
As predicted, on GeoCurrents, last week, the slick hit the fragile Chandeleur Barrier Islands, home to the Breton National Wildlife Refuge. The Northeastern part of the slick has made its way towards the Mississippi delta. The next major milestone for the oil would be the gulf stream.
The title, worst-case-scenario, does not involve hyperbole on our part. The oil is as thick as crude comes, buried deep, and threatening the whole of the Gulf of Mexico. Until a relief well is dug (if even, possible, three months from now), the three main options to slowing the spill are: plugging the spill with a new smaller dome, cutting the pipe (which could actually increase flow), and plugging the hole with material with a “Junk Gun,” which sounds more like an item from Captain Nemo’s Nautiulus, than an effecive deterrent to what is quickly becoming the worst environmental disaster of all time. 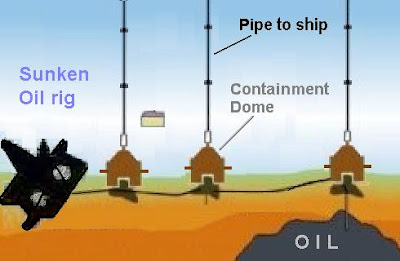 While we can’t plug the spill from home, knowledge of the spill, is power, as always. To stay up on the true extent of the spill, here are some more of the latest tools for tracking the Deepwater Horizon Oil Spill in Google Earth.
This GeoCurrentcast utilizes the most recent layovers available in the google earth community, combined with an original lecture, backed with the most recent Satellite Data and Imagery. The visible surface size of the slick, current flows, satellite images, and rupture sites are all marked in this file.
To view this file, open Google Earth and download this file. Then double click the video icon in Google Earth to play the tour. You can toggle the satellite imagery, overlays, and information in the Google Earth Browser on your own, outside of tour mode.
Finally, take the time to play with this web-module, which will compare the size of your own city, to the size of the oil well.
Below is a map of the spill’s forecasted trajectory through Wednesday, generated of by NOAA today (Sunday, 5/9): 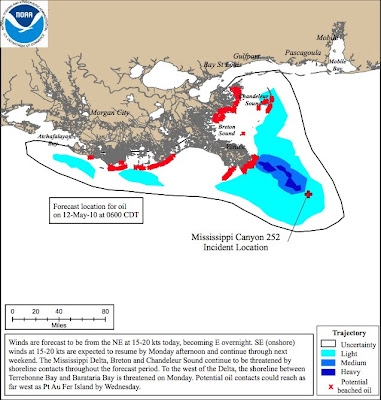 A look at the above image, alongside our Google Earth Current flows, shows that within the next two weeks, the oil slick could get dangerously coast to catching a ride on the Gulf stream loop current.
So, while we await the sum totals of disaster, and are forced to burn crude a so thick and heavy and deep, not even hydrocarbon-starved microbes can decompose the oil. Instead, part of the procedure is to torch these now desolate grey-watered ocean wastelands.
Once the worst of the slick has burned off, diluted, and moved beyond the gulf, the United States will still be left swathes of unanswered questions on ecological recovery, liability(the BP FAQis a great source), social justice, and the future of Offshore Drilling in world energy policy. Hopefully this inexcusable tragedy can be used is utilized as a rallying point for change, otherwise it’s all for naught.
We’re sticking to the grim prediction at GeoCurrents.info that the Deepwater Horizon spill will be a record breaker in terms of total volume and dollars.
We are all guilty.