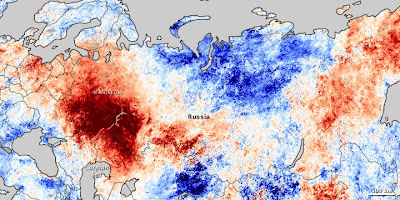 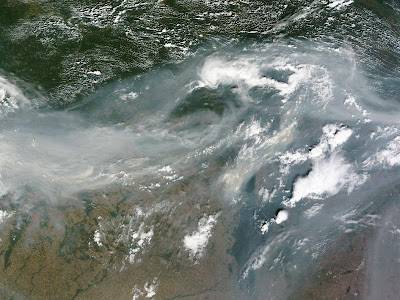 Pictured above are NASA images of the Summer’s temperature anomalies that caused a massive drought, the resulting smoke from forest fires which have caused more than 100 fatalities on the way to blanketing in Russia, Belarus, and Ukraine in smoke since the beginning of August.
Moscow has been covered in smog, death rates in hospitals have spiked, and contaminated radioactive land in Chernobyl has burned. A ban on Russian grain exports went into effect yesterday as fires and drought have hampered at least 1/5 of the total supply.
The cost of the fires is now at a staggering $15 Billion, a figure more than that of Hurricane Katrina or the BP Spill Cleanup, and a figure estimated to be 1% of Russia’s total 2010 GDP.
Global Warming and feverish storms catalyzed the fire, but the blaze has reached disastrous proportions, through preexisting environmental degradation and local mismanagement, and the response has been hampered by government secrecy.
This video from Nasa, show’s the chronology of the outbreak, in terms of Carbon Dioxide Pollution:
This post by the cyber-cartographer “Kite Surfer” in the Google Earth Forum points out that 30 of the 50 major fires during the first week of August occurred in areas of major deforestation. More blood, ash, and toxic phlegm, can be tied back to the hands of large Russian logging and forestry operations when one considers the fact that many of these corporations were put in charge of fire control, neglected their tracts, allowed fuel unharvested fuel to build up, and failed in suppression.
A response to this post by Google Earth Boards Member MarkoPolo, outlines the crux of the issue here, citing a paper published in ‘Wildfire Magazine’. These fires are not merely a periodic natural disaster, they have been compounded by systematic mismanagement:
From THIS cover article in the July/August 2010 issue of “Wildfire” magazine entitled “Russian Disarray”: “Currently, the (Russian) state cannot legally derive profit from owning the land, such as by selling timber to fund forest management, but it can sell the land to private parties. As a result, large forest areas are being sold non-competitively for use as private hunting preserves, and private companies are harvesting large areas without returning profits or reinvesting in the land or management of the forests. In the absence of formal regulation, Russia has an extremely low efficiency in the use of forest resources: today only 28% (165 million square meters) of the logged timber volume (609 million square meters) is actually used. The cut (but unused) timber volume has led to a fuels buildup that is feeding large fires. Recent satellite images reveal that most large fires now occur in the band where most logging occurs.”
For more direct visual evidence, download this Google Earth File, which outlines areas of Deforestation and Major Fire Area. In order to view the file, download Google Earth, and then open the kml file in your browser.
The fires are proving to be a major albatross for both Vladimir Putin and Dmiti Medvedev. In early August, Medvedev was hasty to respond, more concerned with corrupt projects for 2014 olympics and his own leisure.
Vladimir Putin, however, topped his counterpart’s response with this this ridiculous PR stunt, flying a water bomber over the blaze:
The two have also shifted blame, chewing out regional authorities for their lack of response to the fires. Ironically, the lack of local accountability is a product of an executive power grab in 2004, which banned the direct election of local governors and kept individual candidates off the ballot.
These measures caused local fire prevention prefectures to lose their teeth and funding, exacerbating today’s problems. The firefighters are armed with technology as old as their website: Fireman.Ru, a fascinating database of songs and proverbs from Russian Firefighter lore, undone only in translation by the idiomatic expression. This poem, from the “Do Not Joke With Fire,” section of the site, makes for a much more immediately satisfying moralist read than a Chekhov Play:

... Splattered on the driver field of diesel fuel,
Then the pitch with home-grown tobacco cigarette.
He crushed his cigarette butt into the ground somehow
However, cases have been tobacco.
Wally gone, flashed tires,
Over the field went up suffocating fumes:
The ears are burning – kaloriyki and dumplings
Loaf of wheat bread burn.

Moral – do not smoke in a fire zone?

To close this post, here is a videos of the awe-inspiring ferocity of the firestorm:
Here’s to the safety of those fighting the blazes and touched affected by the drought. 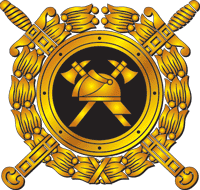