In 2009, the Island of Bermeja, located in the Gulf of Mexico disappeared from site. Now, it will disappear on maps, as well.

Mexico was using Bermeja to leverage a claim on oil rights in the Gulf of Mexico, after all, their state maps showed the Island as an unquestionable part of their territory. The problem was, when a crew went out to examine the Bermeja, it could not be found.

Another crew was sent out to investigate the claim, alas, nothing to be found. The disbelief even led to conspiracy theories of the CIA destroying the island (see: Bikini Atoll). The United States gave a prompt and cutting response to Mexico, “No Island, No Claim,” the norm in international law.

This case was followed up in the last week by news that New Moore Island, or S. Talpatti, in the Bay of Bengal, a former maritime dispute point between India and Bangladesh, had ceased to be.

Many of the UN’s tiniest and lowest lying states, Tuvalu, Nauru, and Maldives, for example are in jeopardy of becoming submerged in the next decade, due to rising ocean levels.

The international community has been somewhat sympathetic to these soon to be submerged countries, with New Zealand, Australia, Taiwan, Sri Lanka, and even the United States offering financial aid. There are plans in the works for full scale evacuations of many Islands Oceania, should there be a catastrophic upsurge in sea levels in the form of a king tide.

It is likely that those in Tuvalu, Nauru, and some Parts of the Maldives and the Marshall Islands could soon become people without a state, only a few years after joining the UN. 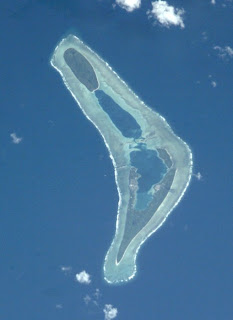 This issue is the focus of this week’s GeocurrentCast, illustrated in Google Earth. We’ll be taking a satellite look at the fate of the world’s tiniest and least elevated island states.

Next, download this file, and double click the video icon in Google Earth to start the guided, narrated tour.

You can pause or stop the tour at any time to investigate some of the islands in closer detail.

Geocurrents.info is now on twitter. Make us your source for history, geography, and cyber-cartography.