Skip to content
Earlier in the week, Professor Lewis left us with a dazzling posting on the Death and Partial Rebirth of the Aral Sea.
To see the decline of the Aral and the Ogalala at its most dramatic,download this week’s Google Earth File, as the companion and informational heart of this post.
For those of you whom are still, unfamiliar, The Sea of Aral was once one of the four largest lakes in the world. However, massive mismanagement, inefficient irrigation channels, overuse, poor crop choices, were at the core of Stalin’s unwavering “Great Plan for Tranformation of Nature,” and continued by the Uzbek and Kazhahk governments until a last ditch effort to save the Lake (called a sea), turned to a puddle. 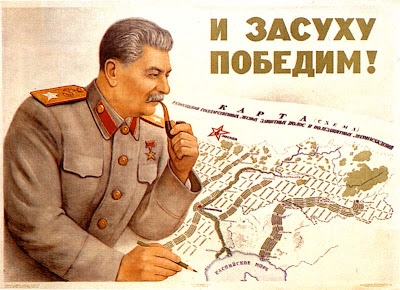 At the peak of the Aral’s water loss, the cubic volumes of entire cities would pack up and leave in a single month. What’s left are rusting caracassess of ships, and empty deserts where water once flowed. The burgeoning trade in muskrat furs is gone too, with the tides. 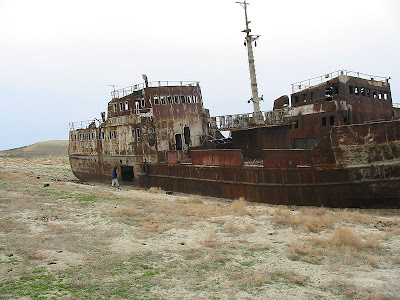 What’s interesting about the case of the Aral was that there is no physical change to the water level on the satellite images, until it was far too late. Of course, the real problems with the Aral were discovered after massive hubristic, expensive, and inefficient construction projects had been in the works for years. The ironic part of this decline is that during the period of the greatest drain, the satellite imagery of the water level’s decline isn’t quite there. But when the countries finally realize their error, and put measures in place, the Sea sprints into its final decline.
But this problem does not just apply to former Soviet States. The breadbasket of the United States, as well, is guilty of heinous crimes in water mismanagement with the Ogalala Aquifer.
This vast underwater freshwater system was thought to be inexhaustible by US Farmers, even later into the 20th century. Recent estimates show that the Aquifer could be dry in as little as 25 years if consumption and replenishment rates continue as they are.
US farmers will be hard pressed to switch, considering their congressional power, but seeing the Colorado River dry to a near trickle has prompted a proactive response from the USGS.
The solution in the case of the Ogalala, as well as the case of Aral, may be to simply switch away form Irrigation dependent agriculture. In other words, we should avoid costly, terraforming, “Great Plans for the Transformation of Nature.” If the Soviet Government had simply decided not decided to grow cotton in an unnatural environment, the Aral would likely be a cohesive body of water today.
The decline of the Ogalala threatens the freshwater supply of the whole of the Central United States, and merits more significant political attention. This issue was brought to my attention in such a striking manner in the google earth forums, by a fellow cyber-cartographer- Diane, whose work was to good not to share with you all.
If you also work in Google Earth, or would like to contribute and correspond with GeoCurrents, please send us a message on our twitter, or contact us here.

Also as a bonus, for those of you interested in tracking the Icelandic Volcanic Eruption (which we correctly predicted a few weeks back) in Google Earth, please refer to this KML file.