A look at BP’s live feeds of the spill, is indeed a sight for sore eyes.
A look at the most recent Google Earth imagery, however, is still an eyesore.

After 87 days, and more than 90,000,000 gallons of oil spilled, this is certainly a cause for tempered celebration, as if we were a triple amputee, elated at the fact that we get to keep our final limb.
The Gulf is now four days free of additional leaking, yet the figure of 581 miles of oiled shoreline, is a guarantee to increase. Seven thousand vessels and 40,000 hands remain deployed on cleanup process, with years of work ahead.
As of July 12, BP spent an estimated 3.5 Billion on its cleanup processes. This is actually a meager figure, considering their average annual revenue exceeds 12 billion.
Imagery from the day before the end of the spill from MODIS/Skytruth shows a significantly lessened sheen on the surface from a month ago: 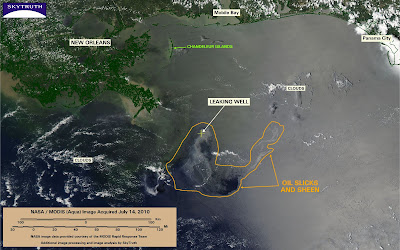 Surface reports, however, are a tempered method of assessing the damage. Much of the accessible oil on the surface was burned off in the largest “controlled burns” since the first Gulf War. The these burns have created elevated levels of Methane, Hexane, and other Neurotoxins in the air from New Orleans to Florida. An artist, quoted in the Christian Science Monitor, compares the smell to huffing oil paint.
What comes up, must come down, and now the Gulf States will have to content with exponentially larger quantities of sulfur dioxide in their rainfall, leading to a contamination of inland freshwater ecosystems.
The sheen is at its most megalithic below the surface, with slicks the size of small states. While the surface is certainly clearer, the effects are starting to make themselves known up the Atlantic Coast.
As we reported earlier on GeoCurrents, the Sheen had entered the North Atlantic Loop Current, and this has been corroborated with reports of oil washing ashorein near Jacksonville and St. Augustine, on Florida’s Atlantic Coast.
The video below represents and academic projection of the oil’s progress from the loop current, through the Atlantic coast.
While this continues, our elected representatives will continue squabbling, pretending to act in our best interests while their proposed ban on drilling is related only to worker fatalities, without sufficient environmental safeguards.
The congressional attack on BP for their supposed under the table dealings to free the Libyan Lockerbie bomber is but another attempt to divert attention and culpability through the fearmongering veil of terrorism. After all, if Cheney had not been looking tosave his billionaire cronies a few meager thousands by reigning back safety standards, the disaster may have been prevented altogether.
However, America is now in an era of de-facto legalized bribery through its lobbying machinery, leading to “Pervasive Corruption and a Poverty Trap.” Look for our elected representatives to follow all the red herrings in its investigation of its patrons.
Unfortunately we don’t have one of Dashiell Hammet’s Continental Operatives, with an oiled gull as his client, to go Blood Simple on those behind this once in a generation disaster, and those preventing proper regulation.
The hones falls on us to do what we can, to support forward thinking organizations and representatives. The gulf ecosystems have been irreversibly damaged, and organizations such as the International Bird Rescue, the National Wildlife Rescue, and A Matter of Trust are in need of financial support at this time to continue their efforts for years to come.
An ideological shift, however, is an even more important development that must result from the disaster. A new crop of muckrakers, reformists, and activists must spring forth to remove this country from the belly of its dying machinery.
After 87 days and 90,000,000 Gallons, the status quo has remains. The cap on the well may stop the flow, but the social and political ills are still gushing torrents. 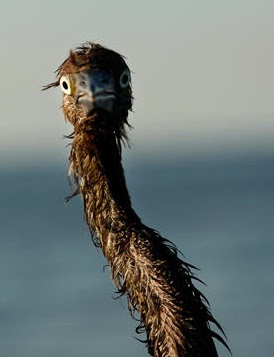