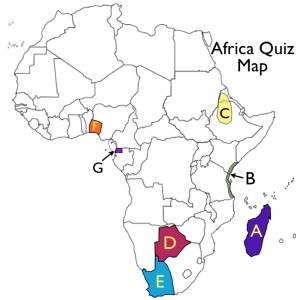 Yesterday’s GeoNote criticized a Christian Science Monitor Africa Quiz. Today’s gives an example of the way in which I test my students in multiple-choice exams (I also give essay-format exams).  Answers tomorrow.

a. is culturally a mélange of South Asian and African influences; partially as a result, it is one of  the more economically successful countries of this  region.

b. has a unique mixture of Southeast Asian and African cultural influences; all of its closely related  indigenous dialects are Austronesian, linked to those of Insular Southeast Asia.

c. is largely Muslim in religion and Swahili in language, owing to its crucial position in Indian Ocean maritime trade networks.

d. was the site of intense colonial rivalry between Britain and France that ended in British colonization; it was later destabilized by a long “proxy war” pitting forces aligned with the Soviet Union against those aligned with the U.S.

a. is largely Christian, and is one of the more economically and socially developed parts of Sub-Saharan Africa.

b. has been the site of a long-standing insurgency, as the people of the region seek to create their own country.

c. is noted for the fact that its residents speak the Bantu language; it also has extremely low levels of social development.

a. has an extremely low population due to its desert climate, and is populated by Somali-speaking people.

b. is officially part of Ethiopia, but has successfully rebelled and thus forms its own insurgent state.

c. is mostly Muslim and animist in religion, and contains a wide variety of languages, including Somali and  Oromo.

a. is the only African state in which the official language belongs to the Khoisan family (famous for its “clicks”); its largely nomadic cultures, however, have prevented it from achieving  economic success.

c. is noted for its high per capita GDP, which is based mostly on its oil and diamond deposits; most of its people remain extremely poor, as its wealth in monopolized by a narrow elite.

d. is resource rich but politically chaotic and increasingly impoverished, mostly because its commercial farms have been expropriated by its repressive government.

a. demographically dominated by Zulu-speakers, but also contains a significant number of people of South Asian background; English is widely used as a common language.

c. demographically dominated by White Afrikaners who speak the Afrikaans language (Dutch derived); its leaders are actively seeking to separate it from the rest of South Africa.

d. demographically dominated by English-speaking people largely of British and Irish descent; as a basically White area, it is quite distinct from the rest of the country.

a. is noted for its high levels of social development, owing to its vast oil deposits, effective government, and religious uniformity.

c. is mostly Christian, has large oil deposits, but is the poorest part of its country; it is also noted for its ethnic  tensions and small-scale insurgency.

d. is the Ibo-speaking area that formed a strong kingdom before British colonialism; it remains the center of  political, economic, and military power in Nigeria.

7. The purple country (including the island) marked G is noted for:

a. its high levels of economic and social development, as well as for its well-run government, thanks largely to its massive oil deposits.

c. has low levels of economic development but relatively high levels of social development, owing to the  successful health and education efforts of Christian missionaries.

d. is a country in name only, as it is actually controlled by its much larger neighbor to the north.