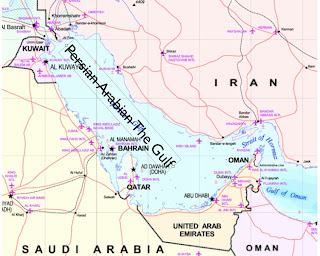 In mid-January 2010, the Islamic Solidarity Games—scheduled to take place in Tehran in April—were cancelled over a toponymic dispute. The Iranian organizers of the athletic competition insisted on labeling the body of water located between Iran and the Arabian Peninsula the “Persian Gulf” in their promotional materials. The event’s organizing committee, based in Saudi Arabia, refused to tolerate such effrontery, and called off the competition. Officials in Saudi Arabia, like those in many other Arabic-speaking countries, regard the term “Persian Gulf” as a form of Iranian cartographic imperialism. They prefer Arabian Gulf, and if that name cannot be used, they insist on a neutral term such as The “Arabo-Persian Gulf” or simply “The Gulf.”

This controversy reveals the deep cultural cleavage between Iran and the Arabic speaking realm. Most other bodies of water named for particular places do not inspire much animosity. The United States lodges no protests over the Gulf of Mexico; India does not object to the Arabian Sea; Malaysia has no problem with the South China Sea; Taiwan and Japan do not worry about the Philippine Sea; Madagascar and Australia are fine with the Indian Ocean. The only other water body to generate a similar quarrel is the one marked on our maps as the Sea of Japan, which the Koreans insist on labeling the East Sea. Like the Arabs and the Persians, Japanese and Koreans have a long history of conflict, which lends vehemence to seemingly arcane debates over geographical nomenclature.

The term Persian Gulf has been widely used by European geographers since the time of the ancient Greeks. Substituting the term “Arabian Gulf” would generate its own problems, not least by infuriating the Iranian people. It could also lead to confusion with the adjacent body of water known as the Arabian Sea, or even with the nearby Red Sea (which Europeans sometimes historically called the Arabian Gulf). Partly for these reasons, the International Hydrographic Organizations maintains that the Persian Gulf is the Gulf’s only proper name. The United States government, however, is no longer sure. Although the State Department’s Board of Geographical Names settled on Persian Gulf in 1917, the U.S. military now asks its personnel to avoid the term, preferring either “The Arabian Gulf” or simply “The Gulf.” U.S.-based universities operating branch campuses on the Arabic-speaking side of the gulf do likewise. In the United Arab Emirates, the term Persian Gulf is simply banned.

What’s in a name? In a politically charged context, evidently quite a lot.