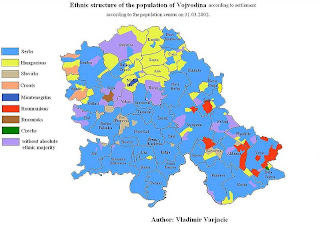 In late 2009 Europe gained a new autonomous region when Serbia granted its northern area of Vojvodinia control over its own regional development, agriculture, tourism, transportation, health care, mining, and energy.Vojvodina, population two million, will even gain representation in the European Union (although it will be allowed to sign only regional agreements, not international ones). On December 24, Serbia’s main opposition party challenged the autonomy provision in the country’s constitutional court, arguing that it could lead to Vojvodinan independence — further dismantling Serbian national territory. Most observers think that this objection verges on paranoia. Vojvodina’s population is 65 percent Serbian, and a recent poll found that only 3 percent of local residents want independence. Vojvodinans evidently favor autonomy largely for economic reasons. But claims for heightened self-rule can lead to further claims; already a local ethnic Hungarian group wants its own autonomous zone within the larger autonomous area of Vojvodina (see map). 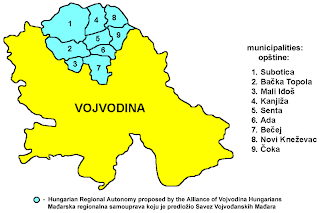 The flat, fertile expanse of Vojvodina is noted for its ethnic diversity. The region has no fewer than six official languages (Serbian, Hungarian, Slovak, Romanian, Croatian, and Pannonian Rusyn), and its actual linguistic diversity is greater than that. Romani (“Gypsy”), for example, has no official status, even though more Vojvodinans speak it than speak Croatian. Of the official languages, Pannonian Rusyn is the most intriguing. While Ukrainians regard it as a dialect of their own language, those who speak it insist that it is a language in its right. Pannonian Rusyn is a language of instruction in one of Vojvodina’s public schools, and regular television and radio broadcasts are made in the language. There is even a professorial chair in Rusyn Studies at Novi Sad University. 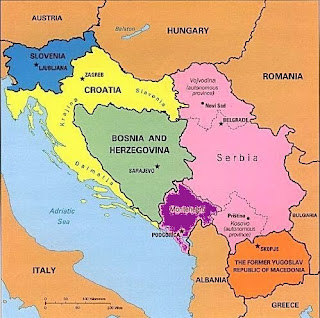 The struggle for the autonomy of Vojvodina is said to date from 1691, when local Serbs pushed the Austrian Empire for a separate “voivodeship” (the word “voivode” originally meant “one who leads warriors”). In 1849, the region was granted limited autonomy by the Habsburg emperor as a separate duchy, but that status was soon lost when the Austrian Empire became the Austro-Hungarian Empire and most of Vojvodina passed to Hungarian control. When that empire was dismantled after WWI, Vojvodina went to the new state of Yugoslavia.

The people of Vojvodina continued to push for autonomy. Limited self-rule was gained in 1945 when the new communist government of Yugoslavia began organizing the country on federal lines. In 1974, much greater autonomy was gained when a new Yugoslav constitution created the “Socialist Autonomous Province of Vojvodina.” But Vojvodina, like Kosovo (another “socialist autonomous province”), remained part of Serbia, and thus did have the full scope of self-rule granted to such constituent Yugoslav republics as Slovenia, Croatia, and Macedonia. In 1990, as Yugoslavia was breaking up, Vojvodina lost ground. Under the rule of the hard-core Serbian nationalist Slobodan Milosevic, it was still called an autonomous region, but it no longer had autonomy.

Although Vojvodina did not experience the ethnic violence that visited Bosnia, and while it has continued to make accommodations for its minority groups, tensions persist. Hungarians, by far the largest minority, often feel threatened, and many have been moving to Hungary. In Hungary itself, far-right nationalists continue to insist that Vojvodina, like Slovakia and Transylvania, are by rights Hungarian territory. But that is a topic for another posting.