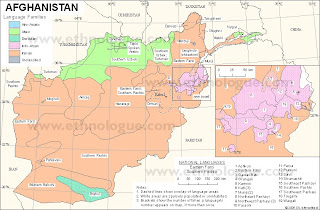 The province of Nuristan in eastern Afghanistan has recently emerged as one of the most insecure regions of the world. On January 13, 2010, a fourth delegation sent to negotiate the return of kidnapped Greek social worker Athanasios Lerounis returned home empty-handed. In October 2009, the United States abandoned its four key outposts in the province after attacks by hundreds of insurgents killed eight soldiers. As U.S. forces withdrew, so did aid officials, including American agriculture and forestry experts. The usual winter lull in fighting has not been pronounced in Nuristan this year. 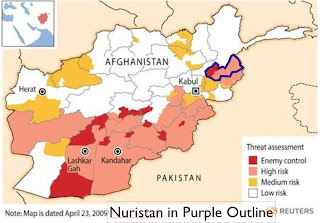 Winter fighting in Nuristan is no easy matter.The extremely rugged province often receives heavy snowfall, unlike most of Afghanistan. The combination of fierce storms and on-going fighting has brought desperate conditions to the civilian population. So far, somehow, the World Food Program and World Health Organization have been able to deliver emergency supplies to parts of the region. But with the U.S. pullback, Nuristan essentially came under the rule of the Taliban, and now seems to form something of a haven for al Qaeda and the violent Pakistani group Lashkar-e-Toiba.

From a historical perspective, Nuristan would seem an 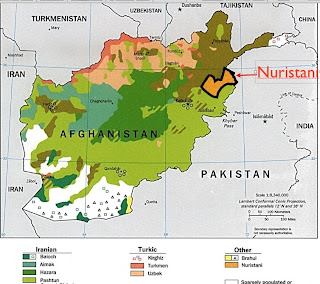 unlikely refuge for radical Islamists insurgents. Until the 1890s, the region was known by a different name: Kafiristan, or “land of the infidels.” Up to that time, the people of Nuristan practiced a polytheistic animism, as recounted in Rudyard Kipling’s short story, The Man Who Would Be King (later made into a movie starring Sean Connery and Michael Caine). Religious practices varied considerably from valley to valley, as Nuristan is noted for its extreme linguistic and ethnic complexity. In fact, what we call Nuristani is not a single language but rather a linguistic subfamily of its own, encompassing at least five separate tongues.

After the governments of British India and Afghanistan settled on the Durand Line border in 1893, the Afghan ruler Abdur Rahman Khan (the “Iron Emir”) determined to establish his authority over all areas on his side of the demarcation line. In 1895-96 his forces conquered and subdued Kafiristan. Once Afghan rule was established, the Emir forcibly converted the local people to Islam, despite the fact that compulsive conversion is contrary to the tenets of the faith. As a result, animism in the area survived only on the British side of the Durand Line, in what is now the Chitral region of Pakistan. There the Kalash, a related group who number some 6,000, retain their polytheistic faith and practices.

On the Afghan side of the border, Islam spread quickly despite its violent introduction. The province was renamed “Nuristan,” meaning the “land of light” – the light being that of the Islamic faith. In the 1980s, Nuristan was one of the first parts of Afghanistan to rebel against the Soviet-imposed regime, founding its resistance on strict Islamic ideals. Through much of the 1980s and early 1990s, large areas of Nuristan formed the self-declared fundamentalist Islamic Revolutionary State of Afghanistan. This “state” was recognized as a distinct geopolitically entity by Saudi Arabia and Pakistan.

Incidentally, because the people of Nuristan tend to have light skin, hair, and eyes, the myth has spread that they are descendants of a contingent of Alexander the Great’s army. More likely, such features derive from the much earlier and larger migration streams that brought Indo-European languages to the region. After all, blue eyes and blond hair are hardly unknown among the Pashtun, Afghanistan’s largest ethnic group.