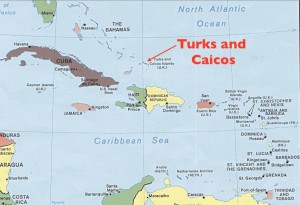 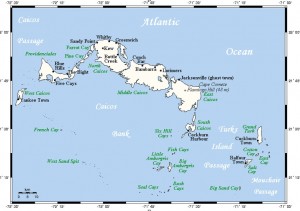 Massive unrest across much of the Middle East, coupled with the earthquake, tsunami, and nuclear disaster in Japan, have tended to crowd other important international stories out of the news, such as the on-going debacle in Ivory Coast. While the emphasis on Japan and the Arab world is understandable, other topics deserve attention as well. In keeping with this week’s Geocurrents focus on the Caribbean, today’s post turns to the largely ignored unrest in the British overseas territory of Turks and Caicos, a group of some 40 islands covering 193 square miles (430 square kilometers) of land and containing roughly 36,000 inhabitants.

In early March 2011, protests targeting pay cuts to civil servants and increased utilities rates broke out on Providenciales Island, the territory’s commercial and tourism center. Protestors blocked the road to the airport, some chaining themselves to roadside railings, threatening the vital vacation industry. Talks between the demonstrators and the British officials in charge of the dependency were soon arranged. On March 16, Britain announced that that it would deliver a “bail-out package” for the islands worth $417 million, a sizable figure considering the fact that territory’s entire GDP in 2006 was an estimated $722 million. Although the British government insisted that the “rescue package will not be used … to reverse current cuts,” it did reduce tensions, at least temporarily.

Unrest in Turks and Caicos has deeper roots than those of pay levels and utilities rates. The current crisis dates to 2009, when Britain dissolved the local government and reinstituted direct colonial rule. That action was taken in response to allegations of widespread corruption, as well as “clear signs of political amorality and general administrative incompetence.” A few years earlier, the chief minister of Turks and Caicos had announced that his party’s ultimate goal was full independence; his opponents had countered that he did so only to forestall a commission of inquiry set up to investigate corruption in his administration. Britain’s assumption of direct rule came with assurances that the change would be temporary, as well as a pledge that it would not affect offshore financial operations, a major business in Turks and Caicos, as in many other Caribbean locales. Top local officials were not mollified; one accused British authorities of “dismantling a duly elected government and legislature and replacing it with a one man dictatorship.” Evidence for financial malfeasance, however, was solid, including one instance in which 239 acres of crown land were leased for $1 an acre. Major courts cases to reclaim plundered assets are pending.

Turks and Caicos has long been geopolitically anomalous. The archipelago was annexed by Britain in 1799 and initially ruled as part of the Bahamas. It became a separate colony in 1848, but in 1873 it was assigned to the British island of Jamaica. In 1959 it was again made a colony in its own right, but it remained under the authority of the governor of Jamaica. In 1965, however, it was placed under the power of the British administrator of the Bahamas, even though it remained administratively distinct. When the Bahamas gained independence in 1973, Turks and Caicos finally got its own governor. Although independence has often been discussed, a more widely mooted alternative has been, oddly enough, union with Canada. Many Canadians evidently fancy the idea of a tropical outpost for their country, while many residents of Turks and Caicos believe that membership in the vastly larger and more powerful but distant and accommodating country would bring substantial benefits.

The idea of annexing Turks and Caicos to Canada has a long history. It was first proposed by Canadian Prime Minister Robert Borden in 1917, but was shot down by the British government. A 1974 annexation bill failed to pass the Canadian House of Commons. In 1982, the local government of the islands, having soured on the idea of eventual independence, made renewed inquiries in Ottawa about a possible union. One sticking point was size, as Turks and Caicos was considered too small and lightly populated to form a Canadian province in its own right. In 2004, however, the legislature of Nova Scotia offered membership in its own provincial body, potentially bypassing such objections. As one Nova Scotian leader opined, such a merger would be “natural, given historical trade connections and a sea-going culture.” Public opinion polling in 2003 indicated that 60 percent of the people of Turks and Caicos supported merger with Canada.

Many Canadians also champion the incorporation Turks and Caicos. Some 16,000 Canadians visit the archipelago annually, and citizens of Canada reportedly own thirty percent of local hotels and resorts. Enthusiasts highlight the economic advantages that Canada would gain from possessing a deep-water port within a regional free trade zone. Geopolitical leverage is also emphasized. As one Canadian blogger recently framed the issue:

Suppose the port [in Turks and Caicos] doubled as a Canadian military operations base for countries wanting help to patrol their waters and to interdict the Caribbean’s robust trade in smuggled arms, drugs and people. … Suppose Canada fills a vacuum of influence where China, Cuba and — bolstered by Iran — Venezuela have stepped in with medical aid, cheap petroleum, schools and factory construction.

But as the author of the blog also notes, concerns have been raised that “winter-weary” Canadians, especially retirees, would overwhelm the small archipelago. From the Canadian perspective, the biggest draw of Turks and Caicos may well be its tropical location.