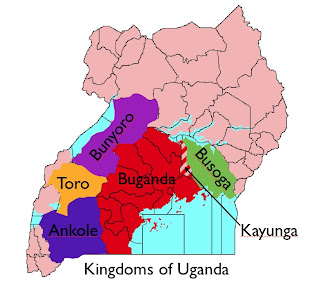 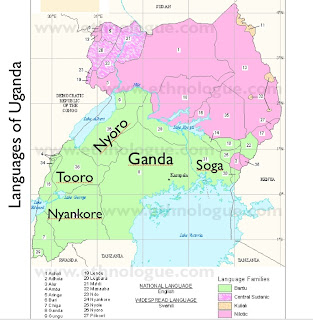 As we saw in last Friday’s post, a single kingdom can include several countries, just as the realm of an individual monarch can encompass many sovereign states. But a kingdom can also form a subdivision of a much larger state. Uganda, for example, contains four, five, or six constituent kingdoms, the exact number depending on how the term “kingdom” is defined.

Like the British monarchy, the Ugandan kingdoms are supposed to be cultural and ceremonial institutions, divorced from actual politics. But Buganda, the largest and strongest of these traditional realms, has been at the center of intense political activities of late. In September 2009, rioting in the capital city of Kampala took some 27 lives after the Ugandan government refused to allow the Kabaka (King) of Buganda to visit the Kayunga district, ostensibly part of his realm. The visit was blocked on security grounds; the Banyala people of Kayunga had unilaterally seceded from Buganda to form their own kingdom, and it was feared that the Kabaka’s presence could spark local violence. Trying to reduce tensions, Ugandan president Yoweri Museveni subsequently declared that Kayunga was an integral part of Buganda, but that the Banyala people should enjoy full cultural autonomy nonetheless. Such efforts did not generate calm. On March 16, 2010, the Bugandan Royal Tombs at Kasubi, a UNESCO world heritage site, mysteriously burned, again inciting deadly rioting in Kampala. Underlying these events are on-going conflicts over land rights and political organization. The Kingdom wants the return of some 9,000 square miles of land that it controlled before the central government stripped it away in 1967, and many people in Buganda are pushing for a federal system of governance that would devolve real authority on Uganda’s constituent kingdoms.

The historical roots of the conflict run deep. Several hundred years ago, Bunyoro was the strongest kingdom in the region, but its fortunes declined in the 1800s as those of Buganda rose. The British entered the area in alliance with Buganda; indeed, after a British “protectorate” was established in 1894, Buganda engaged in sub-imperial expansion, annexing Kayunga and extending its sway into Bunyoro and other areas. The British later sought to solidify their own power while reducing the local kings to a ceremonial role. While they were partly successful in this regard, the Kingdom of Buganda retained a significant degree of prestige and power as well.After independence in 1962, rivalry among the kingdoms and the new political parties contributed to Ugandan political instability. In 1967, the government summarily disbanded the kingdoms. But rather than entering a period of political amity, Uganda descended into the brutal dictatorships of Milton Obote and Idi Amin. Finally, in 1992, president Yoweri Museveni restored Buganda and several of the other kingdoms, insisting that their role henceforth would be strictly cultural.

It is often argued that many of sub-Saharan Africa’s political problems stem from the fact that its countries were created by Europeans in complete disregard for local political traditions, ethnic groupings, and regional economic systems. According to this line of thinking, a federal system of governance for Uganda would make considerable sense. The restored kingdoms of the south correspond relatively well with linguistic groups (see the maps above), enhancing their legitimacy among the local populations. The Baganda people of Buganda in particular tend to evince a strong sense of loyalty to their king and kingdom, generating a sub-state nationalism that could potentially be harnessed for economic and social development.

Yet there are reasons to be skeptical. The few African countries that are rooted in pre-colonial kingdoms – Ethiopia, Lesotho, Swaziland, Rwanda, and Burundi – have hardly been spared political strife.(To be sure, many of Ethiopia’s problems stem from the fact that it was more of an empire than a kingdom. Ethiopia has attempted to redress some of the resulting issues by politically reorganizing its territory on ethnically based federal lines. But its success in this endeavor, as we shall see in tomorrow’s post, has been minimal at best.) The same would likely be true in Uganda. Buganda remains Uganda’s economic heartland; granting it genuine autonomy could stifle development elsewhere in the country – or so many Ugandans fear. And as the events of September 2009 reveal, regionally based conflicts exist even within Buganda, just as they do in the country’s other kingdoms.