On December 23, 2009, the United Nations voted to impose sanctions on Eritrea for supporting Islamist militants in Somalia. The next day, Eritrea denied the accusations, labeling the UN actions as “shameful.”

Regardless of whether Eritrea arms Somali rebels, it is clear that the country has one of the most repressive regimes in the world. In fact, Reporters Without Borders ranks Eritrea dead last in the world in regard to freedom of the press. As the organization’s website puts it, “Life may appear sweet in the floral streets of the capital Asmara, but is in fact nightmarish, particularly in the dark corridors of the all-powerful ministry of information” (http://www.rsf.org/en-rapport15-Eritrea.html). 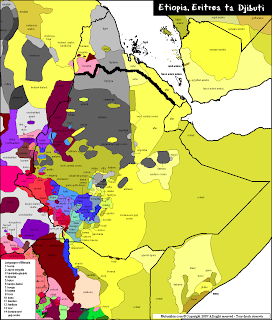 Language map of Ethiopia and Eritrea from Muturzkin, border enhanced

Eritrea’s relations with its neighbors are not friendly. Its border with Sudan is not fully demarcated, it fought with Yemen over the Hanish islands in the Red Sea in the 1990s, and it remains locked in a bitter struggle with its main opponent, Ethiopia. The 1998-2000 border war between Eritrea and Ethiopia may have resulted in as many as 200,000 casualties.

Proponents of Samuel Huntington’s “Clash of Civilizations” thesis have a difficult time dealing with the Ethiopian/Eritrean conflict. Religion does not play a role, as both countries are roughly half Christian and half Muslim. As can be seen in the map above, linguistic lines as well cut across the political boundary. If anything, Eritrea and Ethiopia together form a single “civilizational” unit. Animosity instead is rooted largely in the two countries’ divergent political histories. In the colonial era, Eritrea was under the rule of Italy, while Ethiopia remained independent through most of the period. A post-colonial union failed as Eritrea resisted Ethiopian rule. As proved true elsewhere in Africa, colonially imposed political boundaries may have been violently and arbitrarily drawn, but they nonetheless remain firmly inscribed.