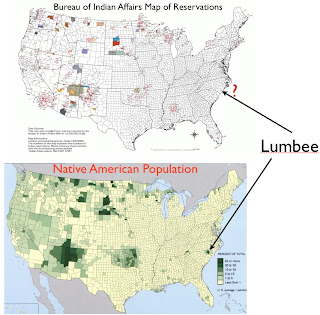 U.S. states and recognized Native American tribes are both quasi-sovereign territorial entities subordinate to the federal government, but they remain fundamentally different kinds of units. Whereas the states together constitute the union and are thus arms of “the state” in the larger sense, tribes are vanquished polities that lost all but a few vestiges of their sovereignty. Reservations are thus never called “states,” even though they have many state-like attributes. But while Native Americans lost statehood, most groups retained nationhood. U.S. states are never considered nations, but tribes almost always are. The distinction between the state and the nation underwrites the differences between these two types of semi-sovereign units.

Unfortunately, the difference between nation and state has been muddied in common usage – along with such kindred terms as “country” and “sovereignty.” In everyday parlance, a nation is the same thing as a country as well as a fully sovereign state. Yet the formal definitions, which reflect earlier usage, remain distinctive. A “nation,” the Wikipedia tells is, is “a grouping of people who share real or imagined common history, culture, language or ethnic origin, often possessing or seeking its own government.” The essence of the nation, in this sense, is more cultural than political. Despite the changed meaning in basic usage, underlying connotations persist. If “country” primarily connotes a territory, and “state” primarily connotes a government, “nation” primarily connotes a people.

As subordinate nations, Native American tribes are supposed to have a “common history, culture, language or ethnic origin.” But when the indigenous peoples of the United States were conquered and displaced, remnant populations often amalgamated, creating hybrid societies. Due to their mixed origins and lack of a singular history, such groups may be denied official recognition by the U.S. government. The prime example of such an unacknowledged people are the Lumbee of North Carolina, whose 55,000 members form one of the largest tribes in the eastern United States (see maps above).

The Lumbee probably originated from remnants of several indigenous groups who sought refuge in the swamplands of southeastern North Carolina, where they were joined by escaped or freed slaves as well as a few poor Whites. They have been struggling for recognition for decades. In 1956, Congress acknowledged the Lumbee as American Indians, but it expressly denied the official recognition that would allow them to receive federal services through the Bureau of Indian Affairs. Critics argue that the Lumbee do not constitute a genuine nation, as they are of mixed origin and lack a native language. The Lumbee themselves have proposed several different tribes as their main progenitors. Many link their ancestry to the Tuscarora, an Iroquoian group that largely abandoned North Carolina for New York in 1700. The Tuscarora tribal government, however, rejects the connection and has opposed official recognition. Currently, the locally favored theory connects the Lumbee to the Cheraw, a South Carolina tribe that was virtually destroyed by a smallpox epidemic in 1738.

The Lumbee case is once again pending in the U.S. Congress. On June 3, 2009, the House of Representatives voted for full federal recognition, agreeing that descent from the Cheraw gives the Lumbee tribal legitimacy. Whether the tribe is mostly of Cheraw heritage, however, could be said to be beside the point, to the extent that nationhood stems from a range of “real or imagined” commonalities. In the current congressional battle, at any rate, the pressing issues are more economic than historical or cultural. The current bill, which has yet to pass the Senate, couples Lumbee recognition with an explicit prohibition on casino development.

Earlier this year, it looked as if the Lumbee would at long last gain official status. Chances dimmed in March after tribal leaders abruptly fired the lawyer who had led their struggle for twenty years. They turned instead to Lewin International LLC, a gambling consultancy. Lumbee leaders insist that the “no gaming” provision still holds, but if the pending bill becomes law, Lewin will enjoy “exclusive rights to develop and manage hotels, restaurants, retailing and theme parks on tribal land.” Many observers think that the Lumbee are indeed angling for casino development, which may undermine, yet again, their quest for federal recognition.