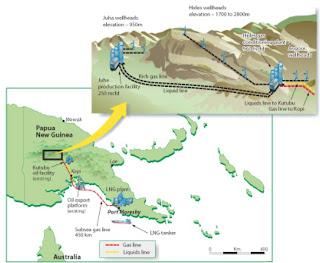 With roughly a thousand languages divided into a surprising number of linguistic families, New Guinea is noted for its extraordinary cultural diversity (see map above). The central highlands of New Guinea also form a diversity center of a different sort: that of warfare. Tribal combat remains ubiquitous, especially in the troubled Southern Highland province of Papua New Guinea (PNG). Most conflicts here are localized, short, and fought with traditional weapons, but the cumulative casualty rates can be substantial.

Few tribal wars from New Guinea reach the global media. Access is difficult when not impossible, and the stakes are regarded as low by the rest of the world. When conflicts are reported it is generally due to unusual circumstances. In February 2010, for example, the Australian Broadcasting Corporation recounted a battle between two clans in the southern highlands that was provoked by a young man sending a pornographic text message to a young woman in a different village. Her male relatives were offended enough to attack the sender’s kin with bows and arrows, knives, and homemade guns. In the ensuing fight, two people were killed, several were injured, and a number of houses were burned. 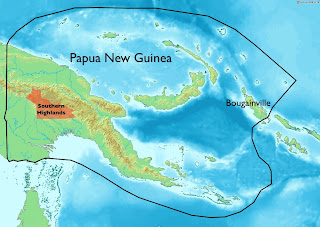 The armed struggles of New Guinea can provoke serious gender disputes. Women often complain that pervasive warfare makes it difficult for them to feed their children. According to a November 2008 report in the Daily Mail, the women of two villages in the eastern highlands decided to end the local cycle of violence in a drastic manner: over a ten-year period, they killed all male babies. “It’s because of the terrible fights that have brought death and destruction to our villages for the past 20 years that all the womenfolk have agreed to have all new-born male babies killed,” reported one local women. Women were able do so – if the reports are true – because they lead relatively sex-segregated lives; men control men’s houses, while women control their own. According to the Daily Mail article, promising efforts were being made by a local pastor of the Salvation Army to mediate between the warriors and the mothers of their children. 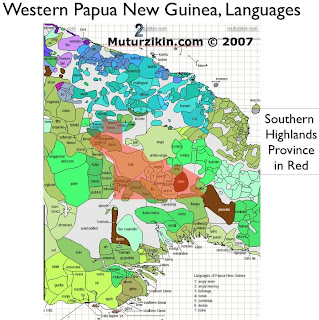 A few tribal wars in New Guinea have global repercussions, prompting occasional reports in the global media. The southern highlands have vast natural gas deposits – according to some reports, the largest underdeveloped fields outside of Qatar. Plans to exploit the gas have been in place for some time, but tribal violence has delayed implementation. In 2006, the PNG government declared a state of emergency in the Southern Highlands, imposing a curfew and sending in soldiers, so that development plans could proceed.

In December 2009, ExxonMobil and several partners determined that conditions were stable enough to proceed with a $15 billion liquefied natural gas project. This would be the largest foreign investment in Papua New Guinea’s history, potentially tripling its exports. On February 11, 2010, however,Radio New Zealand Internationalreported that the project was inciting tribal warfare, even among groups that had previously had peaceful relations. As a result, Exxon had to suspend operations in several areas. As Dame Carol Kidu, Papua New Guinea’s Minister for Community Development stated, “suddenly with this LNG project and all of the tensions and jealousies over the land ownership and all these things, it blew up into a tribal war, a village war; inter-village war.”

Papua New Guinea has had its share of trouble since independence in 1975. Its most serious insurgency had been on the mineral-rich island of Bougainville, physically located in the Solomon Island chain. The Bougainville rebellion was largely defused with an autonomy agreement in 1997. Meanwhile, security deteriorated in the highlands. In December 2004, a report by the Australian Strategic Policy Institute argued that Papua New Guinea was heading downhill and even risked becoming a failed state. In 2009, widespread anti-Chinese rioting and looting further damaged the country’s economy.

Will the development of its natural gas fields give Papua New Guinea the money that it needs to genuinely develop? Or will it form a “resource curse” that will enrich a few, further impoverish others, and provoke more tribal warfare? Either scenario is possible.