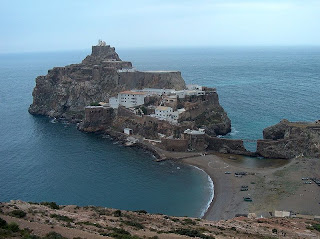 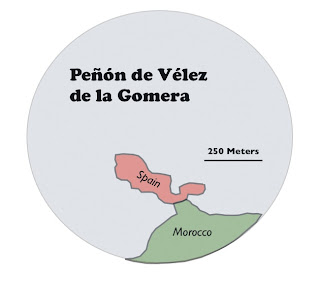 Fans of geo-trivia may be interested in locating the world’s shortest land border between sovereign states. A Fun Trivia posting on the subject – which begins by ruling out Monaco, Andorra, the Vatican, and Gibraltar – selects the two kilometers separating Botswana and Zambia. But if one counts exclaves, a much shorter border can be found: the 85-meter line separating Morocco from Spain’s outpost of Peñón de Vélez de la Gomera. “Peñón de Vélez de la Gomera” is a long name for a small place. This slender peninsula jutting into the Mediterranean was an island until 1934, when a massive storm deposited a sandy isthmus connecting it to the African mainland. Upon Morocco’s independence in 1956, that thin neck of sand became an international border.

The most recent military dispute between Spain and Morocco over Spain’s exclaves occurred in 2002. In that year, Moroccan forces occupied Isla Perejil, an unoccupied speck near Ceuta claimed by Spain. Spain’s vehement objection was supported by all members of the EU except France and Portugal; Algeria, which has a long-running dispute with Morocco over the Western Sahara, also offered support. Spain responded with a commando raid, which took the island with no resistance. Mediation by the United States led to a Spanish pullout and subsequent stalemate. Both countries currently claim and monitor the island, but it remains deserted.

The final Spanish land claim in the vicinity is Isla de Alborán, which lies fifty kilometers off the Moroccan coast. Unlike the other islands discussed in this post, Isla de Alborán is not formally claimed by Morocco, and is not officially a “place of sovereignty.” Instead, it is administered by the Spanish city of Almería, specifically – according to the Wikipedia – as part of its fish market district. It does contain a small naval garrison.